A 17-year-old was arrested on Saturday, April 9 in connection with several incidents of “unwanted touching” at Black Hill Regional Park in Germantown.  According to Park Police, on more than one occasion, the suspect touched people on the buttocks, which is a forth degree sex offense, and then drove away on an electric bicycle.

The investigation took place over several weeks and involved an increased police presence and undercover officers at the park.

Charges are currently pending for the suspect.

Montgomery Parks had posted details of the incidents and photos of the suspect on the NextDoor app on March 25.

“Park Police is seeking information on the above subject being sought for unwanted touching of the buttocks that occurred during the afternoon/evening hours at Black Hill Regional Park, specifically along the Crystal Rock Trail and the Black Hill Regional Trail. The suspect is described as a Black male approximately 15-1S years of age, wearing a black hooded sweatshirt, black shorts, and black sneakers, while riding a dark blue/black electric bicycle similar to the stock photo above. Investigators believe the suspect frequents the above-mentioned area.” 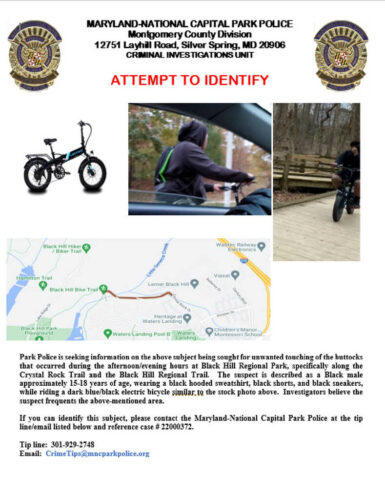 “Our Best Session Yet”: Governor Hogan On The 2022 Legislative Session

Things to Do in Montgomery Parks August 4-7

Things To Do in Montgomery Parks July 28-31

Things To Do in Montgomery Parks This Weekend...

Montgomery Parks: Things to do July 17-19

Parks’ Picks: Things To Do This Weekend in...

Montgomery Parks Announces Line Up of Events to...