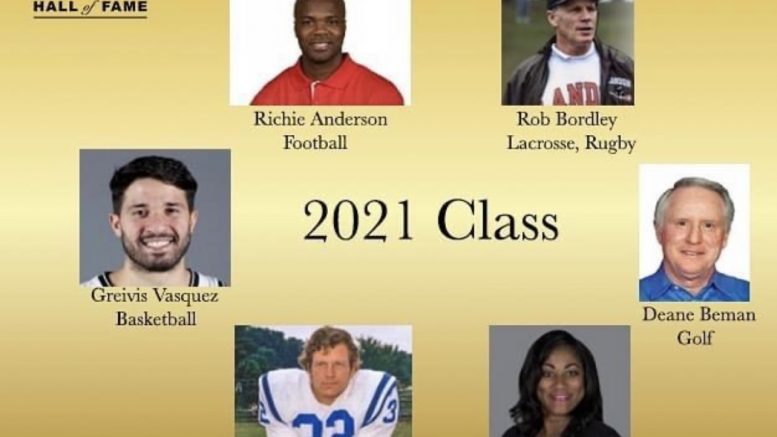 The 2021 class of the Montgomery County Sports Hall of Fame (MCSHF) comes from the gridiron, the court, the turf and the fairways.

The Hall today revealed the six inductees who will be honored in a ceremony on Sunday October 17th:

“These men and women have brought recognition and honor to our community in their respective fields,” says MCSHF Board Chair Trish Heffelfinger. “It is a stellar group and the induction ceremony will be one fabulous evening. And yes, at this time we are planning an in-person event in line with county COVID 19 guidelines.”

More about this year’s inductees:

Richie Anderson played fullback in the NFL for 11 seasons for the New York Jets and Dallas Cowboys.

A native of Olney, the star running back at Sherwood HS, Anderson was named Washington Post high school offensive player of the year and USA Today’s Maryland player of the year, while also playing basketball and being all-county in track. He then went on to play at Penn State.

Drafted by the Jets in the 6th round, Anderson played running back, fullback, and tight end, leading all RBs in receptions in 2000 with 88 catches. After retiring,

Anderson coached for the Jets, Cardinals, and Chiefs.

Deane Beman is one of the most influential people in the history of American golf.

Born in DC, Beman grew up in Bethesda, attending Bethesda-Chevy Chase High School. He went on to play at the University of Maryland and then on the PGA Tour, where he won four tournaments. He won the U.S. Amateur twice and the British Amateur once.

In 1974, Beman became the second commissioner of the PGA Tour. Over his 20-year tenure, he oversaw the growth of televised golf, and created the Senior PGA Tour and The Presidents Cup. After stepping down, Beman played on the Senior Tour for 12 years. Beman is also a golf course architect. He was inducted into the World Golf Hall of Fame in 2000. He now lives in Florida.

Rob Bordley is one of the winningest coaches in Montgomery County history.

He was the head lacrosse coach at the Landon School for 42 years, winning 655 games, the fifth
most victories of any lacrosse coach in the country. Bordley also excelled in rugby, playing for Washington RFC as well as the US national rugby team.

After earning 17 varsity letters at Landon, Bordley went on to Princeton where he excelled in lacrosse and football, earning all-Ivy League honors in both. He is a member of the U.S. Rugby Hall of Fame and the U.S. Lacrosse Hall of Fame.

Charlene Thomas-Swinson has been coaching women’s basketball for 32 years. The Silver Spring native was a two-time McDonalds’ All American
when she starred at Montgomery Blair High School.

She played at Auburn before getting her start in coaching at Takoma Park’s Columbia Union College. Thomas-Swinson was previously the head coach at St. Johns and Tulsa. Since 2015 she has been an assistant coach at LSU.

The Venezuelan born star attended the Montrose Christian School in Rockville, where he led the Mustangs to a 43-5 record as a junior and senior. He went on to the University of Maryland where he started 122 games.

As a senior, he won ACC player of the year and the Bob Cousy award for the nation’s best point guard. After being drafted by Memphis, Vasquez spent 7 seasons in the NBA, while also leading Venezuela in many international basketball tournaments.

Mike Curtis (1943-2020) played linebacker in the NFL for 14 seasons for Baltimore, Seattle, and Washington.

Curtis was a four-time Pro
Bowler and was named 1970 AFC defensive player of the year. A star fullback at Richard Montgomery High School as well as an All-American at Duke, Curtis switched to linebacker once in the NFL. He finished his career with 25 interceptions, and was a member of the Colts Super Bowl winning team in 1971.

The MCSHF is a non-profit organization established in 2018. Our vision is to build a better community through sports and to develop and support access to sports programs for underserved youth. Potential sponsors can contact Board Chair Trish Heffelfinger at 301.717.7283 or [email protected] People wishing to contribute can donate here. 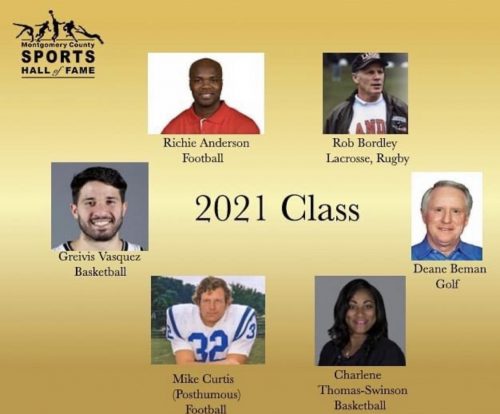 Do You Remember the Ice Rink/ Mini Golf Course in Kentlands?

12 of the Worst Parking Lots in MoCo