The stems from an incident in May of 2020. The covid pandemic was underway, and the three victims planned a trip from their home in Florida to visit the D.C. area. On May 9th, 2020, they drove to Luc’s mother’s home at 911 Balmoral Drive in Silver Spring, Maryland. She had recently had a stroke and was staying in a rehabilitation center but her boyfriend, the defendant, was still living in the home. Luc also planned to assist with arrangements for his mother.

On May 11th, Luc and Tran argued over money in the basement area of the home and Tran attacked Luc with a knife. Luc ran from the home for help, but his girlfriend Pham and their roommate Nguyen were still inside the home, upstairs. Tran encountered Pham on the main floor and brutally attacked her, stabbing her as he followed her up the steps. Pham attempted to push Nguyen into a bedroom for safety. She entered another bedroom where she died from her injuries. Tran turned on Nguyen and began stabbing her before she could lock the door. She was severely injured.

Below is a brief summary of the events as described in court proceedings:

On May 11, 2020, at approximately 3:22pm, the Montgomery County Police Department Emergency Communication Center received a call from Biet Van Tran, date of birth 10/14/1956.  Tran reported that he was at his residence located at 911 Balmoral Drive, Silver Spring, Montgomery County Maryland.  Tran stated that he killed someone and asked officers to respond to take him to jail.

When police responded to the address, Tran was standing outside of the residence and taken into custody.  Within the residence were located 2 women: Linh Ngoc Pham (7/27/1997), who was found deceased from one stab wound that penetrated from her back through her chest; and Thi Ngoc Nguyen (9/20/2000) who was alive but who had been stabbed multiple times in her arm, chest and abdomen.  As she was being transported by Fire Rescue Personnel, Nguyen stated that the “old man” had stabbed her.  Additional to the 2 women, a male named Quy Than Luc (1/29/1990) was located approaching the crime scene from a neighbor’s house.

Luc described to officers that 911 Balmoral Drive was his mother’s residence where she lived with Tran.  A few months prior, his mother had a stroke, and she was currently in a rehabilitation center.  Luc and his girlfriend, Pham traveled to Maryland along with their roommate Nguyen on May 9, 2020, in order to stay at the Balmoral Drive residence and attempt to assist with arrangements for Luc’s mother.

Luc described that he and Tran were arguing about money when Tran armed himself with a chef’s knife and attacked Luc.  Luc said that Tran attempted to stab him in the chest and back.  Luc ran from the house to a neighbor’s residence to call 911.  As a result of the attack, Luc sustained superficial cutting wounds to his back and hand.  Luc was not present when Tran went back inside of the residence at 911 Balmoral Drive.

Responding officers searched the residence and located the chef’s knife in a knife block in the kitchen with what appeared to be blood residue on the blade.  The knife was collected for testing.  DNA testing later confirmed the presence of Pham’s and Nguyen’s blood on the blade.

On May 11, 2020, Nguyen was hospitalized and in critical condition.  On May 15, 2020, Detectives interviewed her at Washington Hospital Center.  During the course of that interview, she described the following events: Pham and Nguyen were in the upstairs of the house on May 11, 2020, when they heard a noise coming from downstairs.  Pham went downstairs.  Shortly afterwards, Nguyen heard Pham screaming and saw Tran attacking Pham with a knife.  Pham tried to escape by running up the stairs.  When Tran saw Nguyen also upstairs, he came up the stairs and attacked her with the knife as well.  Nguyen tried to flee inside of a bedroom and attempted to close the door behind her but Tran prevented her from closing the door.  Tran pushed the door in, grabbed Nguyen, and stabbed her multiple times in the bedroom.

Tran was interviewed at police headquarters on May 11, 2020, and he confessed to stabbing the three victims. 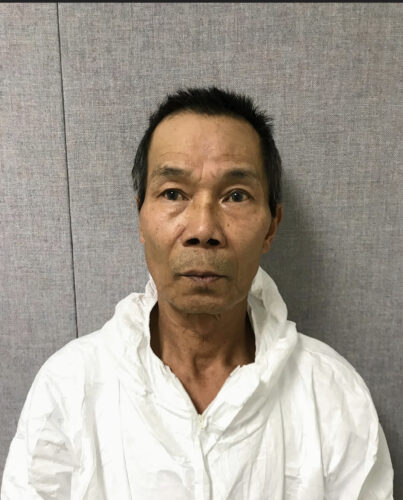