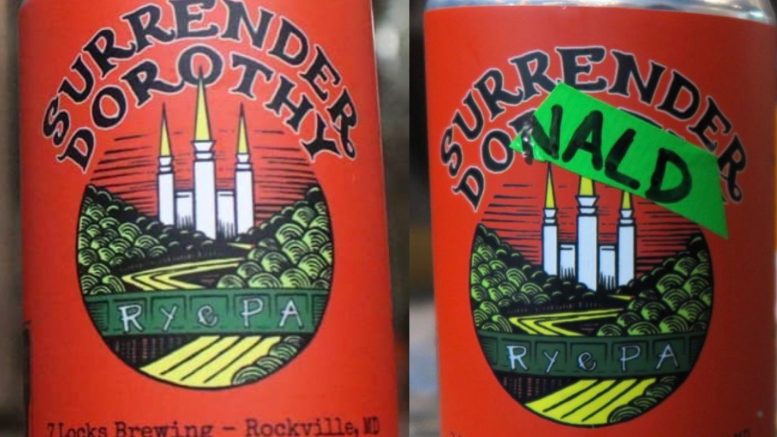 7 Locks Brewery at 12227 Wilkins Avenue in Rockville will be releasing a limited edition of their locally popular Surrender Dorothy beer, renamed Surrender Donald.

The brewery let us know that “Surrender Donald is the same beer with a new revised label to commemorate the recent graffiti ahead of Inauguration Day. Planned limited release of the beer is the week of 1/11.”

The original beer name, Surrender Dorothy, is based on the graffiti that was found on the 495 bridge approaching the DC Temple.

As with anything that touches on politics, 7Locks has dealt with some minor backlash on Instagram after announcing the limited edition beer.
“Stick to making beer and staying out of politics.” “What a great way to lose business 👍🏼“ and “Unfollowed ✌🏼 toxic.” were three of the comments the brewery received on its social media.
When asked for a response to any of the backlash about the beer, 7Locks told us:
“The politics is secondary to the fact that Surrender Dorothy is our flagship beer, and this graffiti was placed at the same location. We name beers after local references, so this just falls in line. Politics aside.
From the political side: we live, work, play in DC. Politics play a part in our daily local culture. The two are tied, and sometimes you just need to laugh at the ridiculousness of our town regardless of what side you are on.”
While there are plenty of supporters, some seem willing to look past any political meaning to the name. ”I’d still drink this beer tho.” and “A little humor to finish 2020” were two of the comments that didn’t  seem to take the upcoming release too seriously.

Boardroom Salon for Men to Open in March