Steve Chu, QO alum and owner of Baltimore restaurant Ekiben, packed up and headed to Vermont when he learned that one of his customers, who was diagnosed with stage 4 cancer, was craving one of their dishes.

A family member had reached out to the Ekiben team to tell them that her mother-in-law, who lives in Vermont but often visits Maryland, had stage 4 lung cancer and was craving Ekiben’s tempura broccoli. The family member shared that she was planning to drive up from Maryland to Vermont and wanted to surprise her Ekiben-loving relative with the dish.

After asking whether she could either have the recipe or ingredients for the broccoli dish so it would be fresh after the long drive, she got a surprising response from Ekiben’s team. Chu replied by saying “Thanks for reaching out. Ephrem [a co-owner] and I are more than willing to meet you guys in Vermont, and make the food fresh so it will be just like what she remembered.”

As reported by Good News Movement , Steve and his team stayed in the area for a couple of days and turned down the family’s offer to compensate them for their air bnb, food, and gas. Chu was joined by co-owner Ephrem Abebe alongside one other team member.

A family member of the customer shared these remarks on a Baltimore area facebook page, explaining the story and commending the Ekiben team: 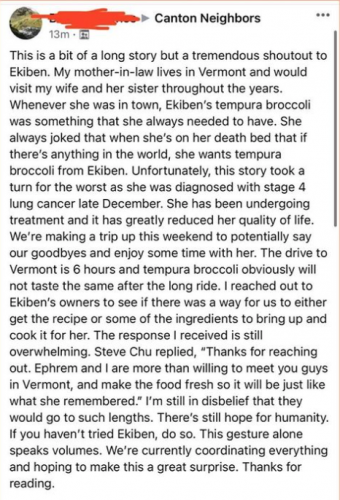