AMC to Take Over ArcLight Theater Space in Montgomery Mall

AMC now lists “AMC Montgomery 16” at 7101 Democracy Blvd (Westfield Montgomery Mall) in Bethesda, the former site of ArcLight Cinema, on its website.  ArcLight announced back in April that due to losses during the pandemic, they would not be reopening any of their locations, including the one at Montgomery Mall. 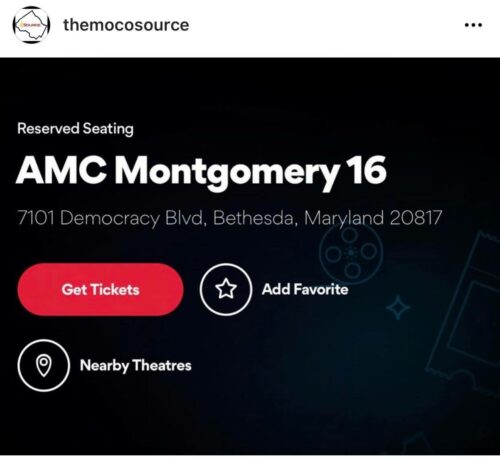 A spokesperson for Westfield Montgomery’s parent company Unibail-Rodamco-Westfield (URW), wrote in an email to Bethesda Beat on Monday that they had “nothing to announce officially yet,” in regards to the theater.

Back in June we reported that AMC was in discussion with landlords of recently closed Arclight and Pacific theaters about potentially taking over some of the locations after raising over $230 million through equity sales to Mudrick Capital Management.

According to a June article in Variety, AMC CEO and president Adam Aron said, “Given our scale, experience and commitment to innovation and excellence, AMC is being presented with highly attractive theater acquisition opportunities,” and “We are in discussions, for example, with multiple landlords of superb theaters formerly operated by Arclight Cinemas and Pacific Theatres. With this agreement with Mudrick Capital, we have raised funds that will allow us to be aggressive in going after the most valuable theater assets, as well as to make other strategic investments in our business and to pursue deleveraging opportunities.”