Antojitos Salvadoreños Isabel is coming to 19114 Montgomery Village Ave, the former Einstein Bagel Bros location in the Montgomery Village Shopping Center. We first reported that a new Salvadoran restaurant would be coming to the Village in May. Construction on the interior of the restaurant is ongoing and a representative tells us they hope to open by October.  The restaurant will serve popular Salvadorian dishes like pupusas, tamales, and yuca con chicharron, as well as traditional Salvadorian cuisine such as pastelitos. La Poteria, which sells Colombian street food and coffee, is located next door.
Also See: Dickey’s Barbecue Pit is Coming to Montgomery Village

Einstein Bros closed its Montgomery Village store in December of last year and has additional Montgomery County locations in Chevy Chase, Gaithersburg, and Silver Spring.  Below you’ll see current photo of the restaurant site, as well as a digital photo sent to us by Antojitos which shows what their sign will look like once installed. 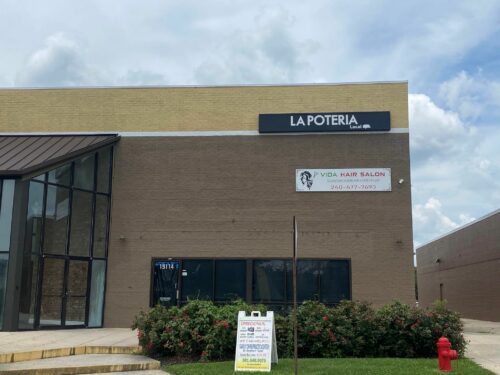