Dr. José Baselga, a renowned cancer researcher and pharmaceutical executive whose work helped transform the treatment of breast cancer patients, died last March at the age of 61. On Monday, AstraZeneca dedicated its flagship building in Gaithersburg to the late doctor. 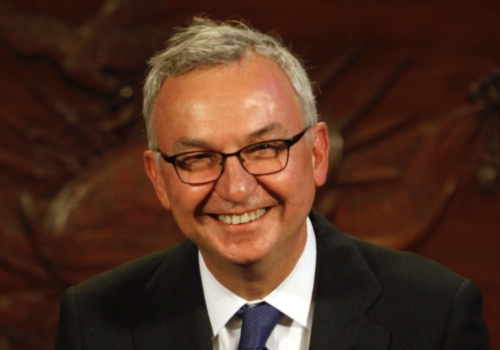 A visionary scientist like José Baselga comes around once in a generation. A gifted physician-researcher, he experienced triumphs and overcame challenges to help transform cancer treatment for patients around the world. As we approach the one-year anniversary of his passing, we reflect not only on his pioneering achievements and contributions to oncology research and clinical care, but also his lasting impact on individuals, teams and institutions around the world.

José was a fierce opponent of cancer through his determination to understand not just the biology of cancer, but how each patient was experiencing the disease. He had an innate ability to see patterns where others could not, and his tenacity helped to push himself and those around him to ask questions and seek new ways of approaching science. A lifelong student and teacher, he was a mentor who worked to inspire researchers, clinicians and students of all types.

On March 7th, 2022, the flagship building on the Gaithersburg campus was dedicated as the José Baselga Building at One MedImmune Way, in honor of his visionary leadership. On the same day, the documentary José Baselga: Cancer’s Fiercest Opponent had its global premiere inside the building, and the event was attended by José’s family, company leadership and many AstraZeneca colleagues.

AstraZeneca continues to honor José’s legacy through several ongoing initiatives, many in collaboration with partner institutions and organizations to maximize impact to the cancer research and rare disease communities. These initiatives include: