Navy Athletics and Under Armour have debuted their astronaut-themed uniform the Navy football team will wear for the 123rd Army-Navy Game presented by USAA (photos below).

The Naval Academy Athletic Association and Under Armour partnered with NASA to use the official “meatball” logo to accurately recreate the spacewalk suit. The white uniform with red stripes and the American flag mimic markings on the NASA spacewalk suit. The Helvetica font was used for the numbers and wordmark. This typeface has been used by NASA extensively for decades, from the space shuttle to signage and printouts. It is one of the most ubiquitous typefaces in the world.

Commissioned at Newport News, Virginia, on November 25, 1961, USS Enterprise (CVN-65) was the world’s first nuclear aircraft carrier. Ordered to assist the Project Mercury Program in February 1962, she tracked and measured the flight of the first American orbital spaceflight, Friendship 7. We chose this patch in honor of Bruce McCandless (’58) and William McCool (’83), who both served aboard the USS Enterprise.

The cleats are all white to mimic the astronaut moon boots with shiny dots to represent stars. The socks are royal blue with a red navy wordmark inside of the iconic NASA “worm” logo patch. 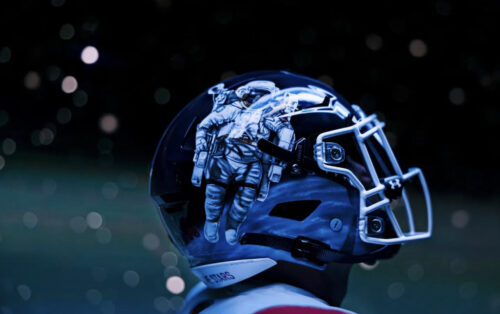 Beyond MoCo: Howl at the Moon DC, Dueling...

Beyond MoCo: Frederick Will Have a New Baseball...