Beyond MoCo: Shooting Outside Nationals Park

Beyond MoCo: Shooting Outside Nationals Park

A shooting outside of Nationals park last night led to a scary situation for fans inside the park enjoying the evenings game.

According to DC police, the shooting occurred in the 1500 block of South Capitol Street, SW, outside of the stadium’s third base gate.

Two vehicles were exchanging fire. Three people were injured, including a female fan hit with a stray bullet.

Fans immediately ran for cover and many took shelter under their seats. Footage from the incident can be seen all over social media.

Hope everyone is safe at Nationals park. I heard a few loud bangs and then a mass exodus. View from my roof pic.twitter.com/MA1B7z83u2

The game was suspended and will be resumed today a 1PM as part of a double header. 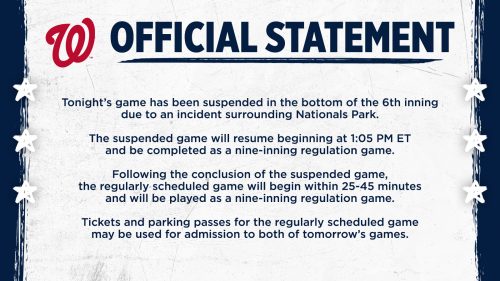 MPD seeks assistance in identifying and locating a vehicle connected to the shooting that occurred last night outside of Nationals Park.