Sascha Baron Cohen’s film Borat first hit theaters 15 years ago this past August. One of the highlights of the film was when Borat was looking to purchase an automobile and came to Criswell Chevrolet in Gaithersburg. 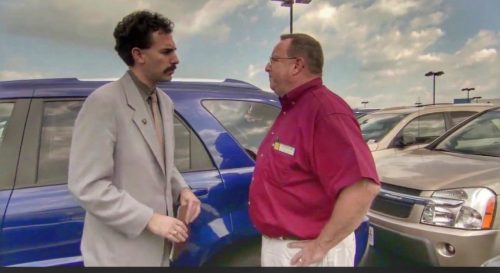 He was helped by salesman Jim Sell, and after checking out Corvettes and Hummers, he leaves with an old ice cream truck (which wasn’t actually purchased at Criswell). Sadly, Mr. Sell passed away in 2012, but he did seem to have really enjoyed his moment in the Borat spotlight as some of the posts on his online obituary include different scenes of his appearance in Borat. Harry Criswell IV, of Criswell Automotive, tells us that he and his family have the fondest memories of Jim Sell.

But Borat wasn’t Sasha Baron Cohen’s first time playing a prank in Montgomery County. Did you know that Cohen also filmed scenes for his 2003 HBO show as his character Ali G with the Gaithersburg Police Department?