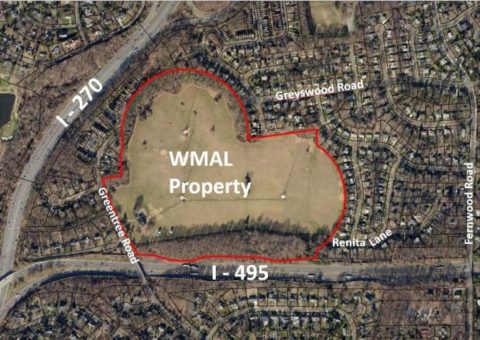 11/4/20 UPDATE: The Towers have been demolished. Video available here.

9/27/20 UPDATE: The towers are schedule to be demolished on November 4th.

Cumulus Media today announced that it has closed on the sale of an approximately 75-acre parcel of land in Bethesda, Maryland to Toll Brothers, continuing to execute on its commitment to reducing net leverage.

Toll Brothers plans to put 309 houses on the 75-acre site, east of Greentree Road and north of the Capital Beltway (image courtesy of the MoCo Planning Board).

The station WMAL(AM) 630 transitioned from its 77 year-old Bethesda, MD transmitter site to a new location in Germantown in May of 2018.

The sale generated gross proceeds of $74.1 million, $5.0 million of which had been received in 2019, and expected net proceeds of $71.3 million after transaction fees and expenses.