Top Posts
Maryland is 2022’s ‘5th Best State for Police...
Danny Rouhier of ‘Grant and Danny’ and Charles...
Less Than a Year Left to Get Your...
Pride in the Plaza to Take Place the...
Honoring my heritage: How Montgomery Planning’s Asian American...
Beautiful Week Ahead After Cold and Rainy Weekend
Family Hoping for Mother’s Day Miracle Searching for...
‘Feeding Our Community: How Shepherd’s Table Provides Over...
MCFRS Respond to Fire at Rockville Restaurant Sunday...
Two MoCo Restaurants Top Eater’s ’15 Hottest New...
MoCoMoCo Police

Today in the Circuit Court for Montgomery County, MD, before the Honorable Judge Sharon Burrell, a jury found D’Andre Wall guilty of attempted second-degree murder and guilty of use of a handgun in a violent crime.

These charges apply to Wall shooting at the male driver of a vehicle during a road rage incident on 8/8/2019 in Germantown, MD.

A female passenger was struck by one of the bullets and injured. –The male driver was 17-years old at the time and has requested that his name not be made public in any further reports.

Wall, 30, of Germantown, is now scheduled for a sentencing hearing on January 10th at 1pm. He is facing a maximum of 40 years in prison on the
attempted murder charge and an additional 20  years on the handgun charge.

Text messages between D’andre Wall and his uncle, NBA player John Wall, were used as evidence in the case.

The photo below shows one of the bullet holes that struck the car. 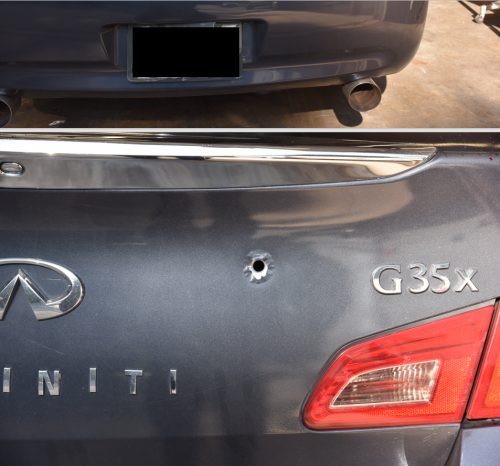