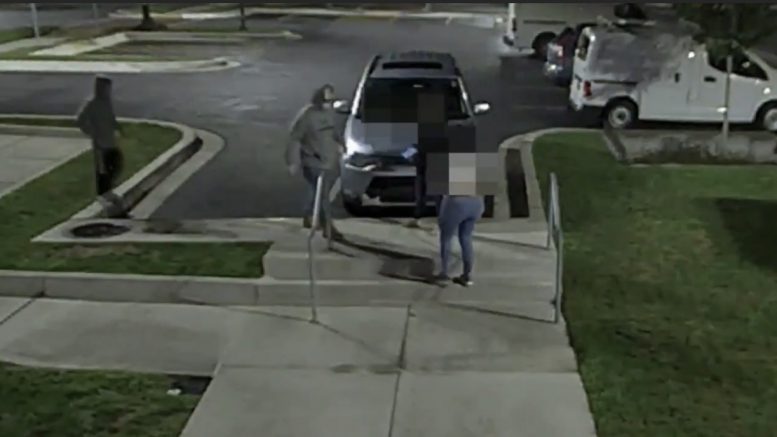 Gaithersburg, MD – Detectives from the Montgomery County Police – 6th District Investigative Section are investigating a September 6 armed robbery that occurred in the parking lot of a business in Montgomery Village. Detectives are releasing surveillance video of the two suspects and are asking for the public’s help in identifying them.

On September 6, at approximately 1:51 a.m., 6th District officers responded to the parking lot of a business located in the 19200 block of Montgomery Village Ave. for the report of an armed robbery that just occurred.

Detectives viewed the surveillance footage and determined that on September 6, at approximately 1:36 a.m., the two victims utilized the vestibule ATM at this business. When they were walking back to their vehicle, they were approached by two individuals. One of the suspects produced a knife and demanded cash from one of the victims; this victim complied and gave this suspect the money she had withdrawn from the ATM. This suspect then punched this victim in the face. This suspect approached the other victim and snatched her cell phone from her hand to prevent her from calling the police. The other suspect remained standing around the victims while this suspect stole the property from the victims. Both suspects fled the scene on foot towards Centerway Rd.

Anyone with information regarding these suspects or this crime is asked to call the 6th District Investigative Section at 240-773-5770. Those who wish to remain anonymous may call Crime Solvers of Montgomery County toll-free at 1-866-411-TIPS (8477) or submit a Crime Solvers tip online or via the app. Crime Solvers may pay a cash reward for information that leads to an arrest in this case.

Over 7 Million Vaccines Administered in Maryland

Be the first to comment on "Detectives Investigate Armed Robbery in Montgomery Village; Surveillance Video of Suspects Released"