Per MCPD:
For Immediate Release: Wednesday, May 11, 2022
Detectives from the Montgomery County Department of Police – 4th District Investigative Section are investigating a commercial burglary that occurred on Friday, May 2, 2022 at the Georgia Avenue Baptist Church in the 12500 block of Georgia Avenue in Silver Spring. Detectives have released surveillance video photographs of the male suspect and are asking for the public’s assistance in identifying him.

On May 4, at approximately 8:15 a.m., 4th District Officers responded to the location for the report of a commercial burglary. The investigation by detectives determined that on May 2, an unknown suspect forcibly entered the church, rummaged through church property and then fled the scene. Detectives reviewed the surveillance cameras and obtained a physical description of the suspect.

The suspect is described as a White male with dark hair. He is wearing a black t-shirt with a “P” over a skull design, blue jeans and black shoes. He is carrying a royal blue backpack or duffel bag.  Anyone with information regarding this suspect or this crime is asked to call the 4th District Investigative Section at 240-773- 5530 or 240-773-TIPS, or contact Crime Solvers of Montgomery County toll-free at 1-866-411-TIPS (8477).  A reward of up to $10,000 is being offered for information that leads to the arrest of the suspect. Callers can remain anonymous. 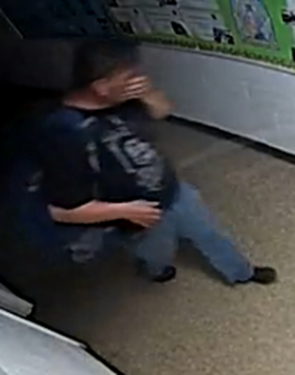 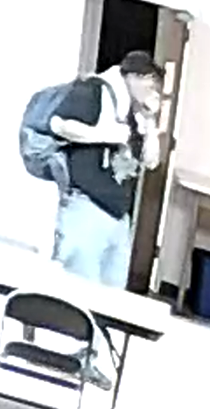 Starbucks Employees in Olney to Vote on Unionization