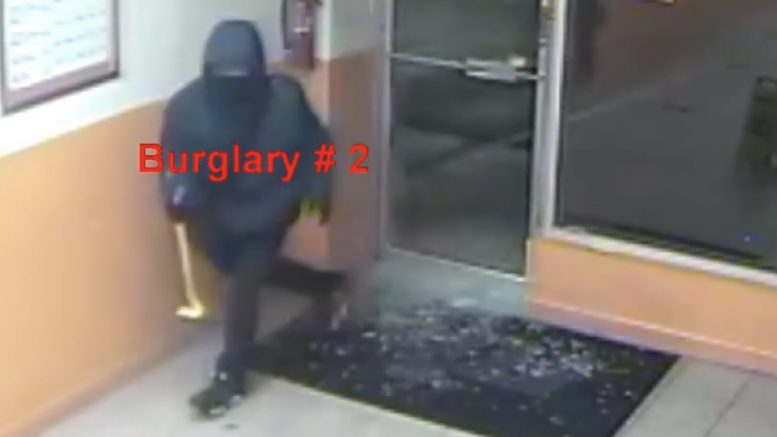 Gaithersburg, MD – Detectives from the Montgomery County Police Department – 4th District Investigative Section are investigating the October 26th burglary and two October 30th burglaries that occurred in the Wheaton area. Detectives have released surveillance video of the male suspect and are asking for the public’s assistance in identifying him.

On October 27, at approximately 1:28 a.m., 4th District Officers responded to a business in the 11200 block of Georgia Ave. for the report of a burglary that occurred earlier.

On October 30, at approximately 1:04 a.m., 4th District officers responded to a business in the 11200 block of Triangle Lane for the report of an alarm activation.

Again, on October 30, at approximately 1:20 a.m., 4th District officers responded to another business in the 2300 block of University Blvd. West for the report of an alarm activation.

The investigation by detectives concluded that on October 30, at approximately 12:47 a.m., the suspect forced entry into the business by breaking the plexiglass of the front door with a crowbar. The suspect used the crowbar to pry open secured areas of the business, but his attempts were unsuccessful. The suspect then exited the business without taking any property.

Detectives believe that these three burglaries were committed by the same suspect who was wearing a black hooded coat, black pants and black shoes.

Anyone with information regarding these three burglaries or the suspect involved is asked to call the 4th District Investigative Unit at 240-773-5530.

Rockville Man Pleads Guilty to Murder of His Mother

Holiday Events for the Whole Family Happening This Month in Wheaton

Be the first to comment on "Detectives Investigate Three Commercial Burglaries in Wheaton Committed by the Same Suspect; Surveillance Video of Suspect Released"