Did You Know Jim Morrison of The Doors Briefly Lived in MoCo?

Jim Morrison was the lead singer of the rock band The Doors, who passed away at the age of 27 in 1971. Morrison is widely regarded as one of the “best singers” of all time”, coming in at #5 on Rolling Stone magazines “Best Lead Singers of All Time” list in 2011 and at #47 on the magazines “Best Singers of All Time” list, but did you know he also briefly lived in Montgomery County as a child?

Morrison was born in Florida in 1943. Due to his father being in the military, the family moved around a lot and briefly lived in Bethesda when Morrison was a toddler (photo below courtesy of the Bethesda Historical Society Facebook page 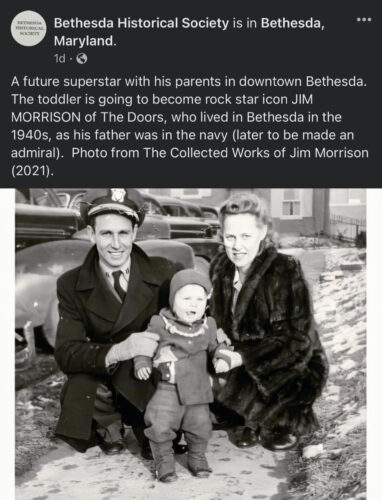 The family moved to San Diego and then returned to the area, as Morrison completed third grade in nearby Fairfax county. After living in Texas, New Mexico, and California again, the family moved back to Northern Virginia, where Morrison graduated from high school in Alexandria in 1961.

He and pianist founded The Doors in California in 1965 and recorded a number 1 hit with “Light My Fire” in 1967.

Per Wikipedia, “Due to his wild personality, poetic lyrics, distinctive voice, unpredictable and erratic performances, and the dramatic circumstances surrounding his life and early death, Morrison is regarded by music critics and fans as one of the most iconic and influential frontmen in rock history.”