The Alumni Basketball League (ABL) will bring together fan favorites from the University of Maryland (The College Park Boys) and Georgetown University (DawgTalk), as the teams square off on Saturday, August 6th (8pm) at the XFINITY Center in College Park. Many familiar names like Melo Trimble, Chris Wright, Anthony Cowan Jr., Greg Monroe, James Gist, Henry Sims, Ikene Ebekwe, Byron Mouton and more (full rosters available below) will be participating in this game.

Maryland’s roster has been put together by Travis Garrison, the 2002 Maryland Gatorade Player of the Year who played four years for the Terps, joining the team right after their National Championship victory (2002-2006), before playing professionally in various leagues until 2017. Georgetown’s roster has been put together by Chris Wright, who played at Georgetown from 2007-2011. He has played, and continues to play, professionally in various league, spending part of 2013 with the Dallas Mavericks.

According to the ABL, “only 1500 tickets will be sold including a limited supply of VIP tickets which will grant you access to our pre & post game VIP reception with players and alumni from both squads.” General admission seats are going for just $15, with VIP options available. According to the Washington Post, “Each player will receive $2,500 for participating, according to Kareem Rush, the league’s creator. Rush, who played at Missouri and for several NBA teams, came up with the idea when he tried out for the first season of ‘Big3’ and noticed the large turnout at tryouts. He believed there was hidden potential within all the talent just outside the NBA because most former college stars spend their professional careers far from the fan bases that rooted for them.” 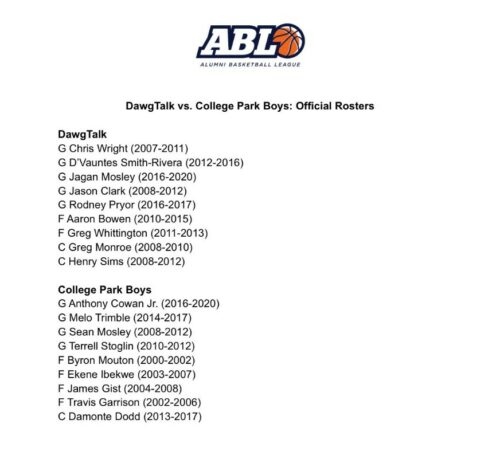 PNC To Close 127 In-Store Branches at Grocery Stores Across Five States, Including Maryland (Locations Not Yet Named)

Beyond MoCo: Maryland Agencies to Treat Parts of...