Around 11:30 Monday morning, emergency responders were dispatched to a single vehicle collision on the Outer Loop of the Beltway between Connecticut Avenue and Rockville Pike.

While responders were on scene of the first crash, Paramedic Engine 707 was struck by a passing vehicle. No firefighters were injured; the driver of the striking vehicle was transported to the hospital  minor injuries.

The fire engine that was struck, a 2008 Spartan housed in the Chevy Chase Fire Station on Connecticut Avenue, was significantly damaged and had to be towed from the scene.

Responders throughout the DC area have responded to numerous collisions during the recent winter weather. 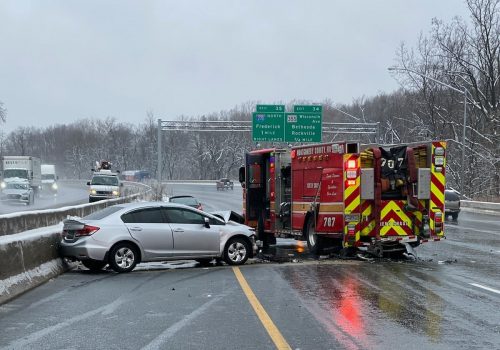 The Cicadas Are Coming… Get Ready!

I-270 Sinkhole Repairs Could Take Weeks

Resurfacing Begins at Section of I-270 South of...

Emergency Sinkhole Repair to Cause Major Delays on...

Sinkhole to Close Two Lanes on Southbound I-270...