Right now it looks like snow will move into the area in the afternoon hours and continue into the evening before changing over to ice and eventually rain. Since the ground will be cold from temperatures that’ll likely remain below 30° until early Monday morning when temps can reach the mid to upper 30s. Sunday evening should be a mess and it may carry over into Monday morning.

Below you’ll see a compilation of some of the weather maps released by local news outlets, but first let’s take a look at the latest map from the National Weather Service (the latest map came out at 3:12pm, so we’ll have an updated map in the morning). Almost all of MoCo is looking at 3-4” before switching over to ice and then rain. 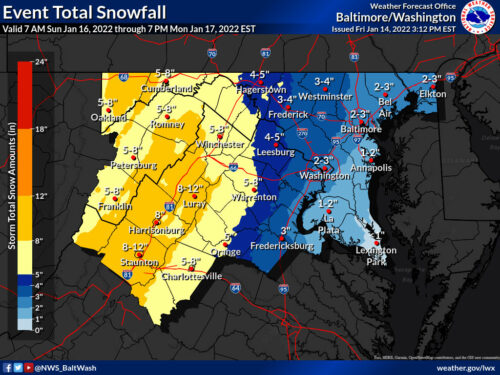 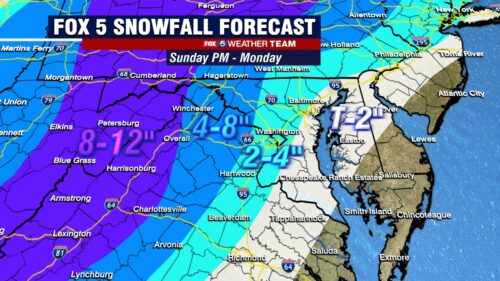 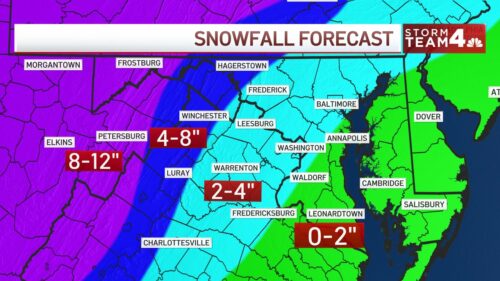 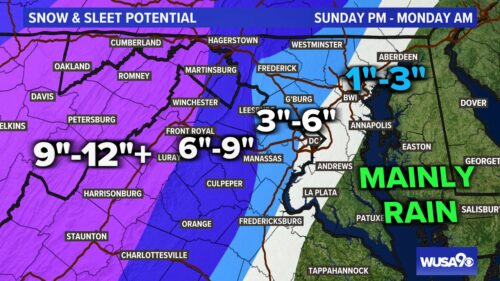 We haven’t been able to find a map from WJLA (ABC7 yet), but we hope to be able to share one tomorrow.

Below you’ll see the “forecaster‘s discussion” from the National Weather Service:

“Winter Storm Watches were expanded to include portions of the I-95 corridor near the Baltimore/Washington metro where confidence of an impactful winter event is increasing.

This is a complex forecast with multiple precipitation types forecast across the region. Overall QPF amounts will be on the order of an inch to an inch and a half, with the highest amounts currently forecast along the Blue Ridge. There will be a local minima in QPF/snowfall amounts just west of the Blue Ridge Mountains due to downsloping and just west of the ridges from Allegany County, MD down to Augusta County, VA. The eastern facing sides of the Allegheny Mountains may see the highest snowfall amounts prior to the ULL and surface low moving north of the region, when the western facing slopes of the Alleghenies see a period of snow into midday Monday.

Uncertainty remains high regarding precipitation type east of I-81, especially near/along the I-95 corridor. The ultimate track and strength of the surface, 850 mb, and ULL low will determine the difference between an inch or two of snow and potentially six inches of snow over a narrow (20-30) km area.

A stronger low will also result in a stronger U-wind component and WAA resulting in the potential for more sleet, along with freezing rain or plain rain. The zones with the best opportunity for all snow are west of I-81. Icing accumulations will be noteworthy across the region where icing sets up.

Currently thinking any heavier icing would be between I-81 and US-15. Where the snow and sleet does change to plain rain, there is the possibility for minor flooding (mainly along/near I-95 and east).

The winds will also be impressive throughout the storm, with the peak winds expected just east of the low and strongest winds areawide as the low pulls off to the north. Wind gusts of 45+ mph are possible along the higher terrain of the Allegheny Front and Blue Ridge. This could result in blizzard conditions. Wind headlines may be needed elsewhere.

Regarding snowfall accumulations near the I-95 corridor, there is the potential for a several hour thump of snow with rates close to an inch or two per hour. While the total accumulations may come short of warning criteria, these rates could be impactful nonetheless.”