Divaris Real Estate has announced that the recently sold Gaitherstowne Plaza is once again fully leased with the signing of the last inline space to Tobacco Hut & Vape Inc, who took the remaining 1,003 SF in the center. The 71,329 GLA Montgomery County shopping center, located at 206 – 300 N Frederick Avenue  holds a tenant roster of many national and regional retailers including Gabe’s, AutoZone, The Vitamin Shoppe, Sherwin Williams, and others. Potential availability remains for the proposed pad site located at the signalized intersection of McBain Avenue & Chestnut Avenue. The pad site could contain a drive-thru according to the photo below.

In June it was announced that Gaitherstowne Plaza was sold for $24.45 Million. Per the press release sent out at that time, the average tenure of tenants at the property is over 10 years. “This is a generational acquisition as there are a limited number of transactions in esteemed Montgomery County, which is ranked as the nation’s fifth-wealthiest county by Bloomberg,” noted Dean Zang, IPA executive managing director.

Rob Gray and Joe Farina of Divaris Real Estate represented the landlord, Milbrook Properties Ltd in the leasing transaction. For additional information regarding this transaction or the DC Commercial Real Estate Market, you may contact them 571-389-7362 or visit us at http://www.divaris.com. 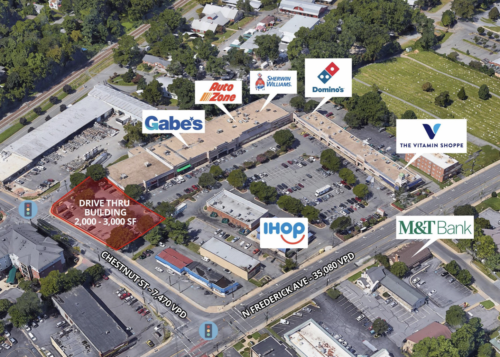