Have You Noticed the Bat-Signal in Burtonsville Lately?

The Bat–Signal is a distress signal device used as a means to summon the superhero, Batman. Though our featured image is a poorly made photoshop, you may be seeing the real thing in Burtonsville soon.

Bill Gibson, the ‘Burtonsville Batman’, stripped down his 1978 Lincoln and was able to convert it into the Batmobile from the 60s Batman TV show entirely on his own.

Since Halloween of 2016, you may have seen Bill and his Batmobile driving around town, in the Burtonsville Day Parade, or visiting places like the Children’s Inn at NIH or the Carl Sandburg Learning Center to brighten the day of children from our area.

Last December, the ‘Burtonsville Batman’ added The Batcycle to his cave, and now there is officially a Bat-Signal.

One of Gibson’s friends gifted him with a Bacardi Rum advertising sign whose logo was a bat that got Gibson’s mind thinking. Then, the journey began. 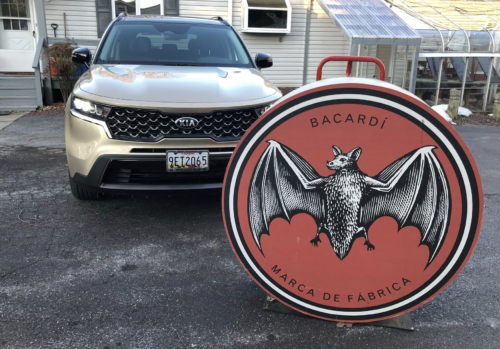 His first test of a simple bat signal was made with a magnifying lens and a spot light. He was able to get it shining about 300 ft up.

The first version of the actual projected about 900ft. Once he built this one, he knew he could scale it up and reach the clouds.

So he kept working…

So if you’re ever in Burtonsville and you see the Bat-Signal…don’t worry. The Burtonsville Batman will be there soon.

Patchy Fog This AM; Snow Possible on Saturday

The Top Twelve Movies in 2021, by MoCo’s Very Own Andrew Italia

Thanks for the great article..!! I’m having fun with all the Bat Toys.. One does have to be standing in pretty much a direct line with the beam to see the image of the Bat Signal. (either directly behind the projector or directly under it) If you get more than about 30ft off to the side, then the unevenness of the clouds makes the image to distorted to make it out. It’s not as easy as Hollywood makes it look..!! I do plan to have the Batmobile in the Burtonsville Day Parade again this year..