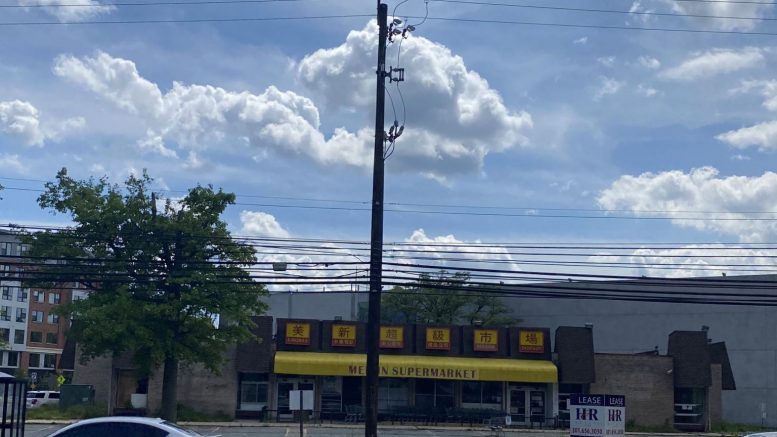 UPDATE 10/4/21: The City of Rockville will vote on if Meixin Supermarket merits historic designation.

Last November we told you that Chase Bank was close to receiving approval to take over the location previously occupied by Meixin Supermarket on Hungerford Drive (355) in Rockville.

Since then, the Historic District Commission (HDC) has recommended and found that the property met certain criteria for historic designation.
The City of Rockville disagrees, as staff recommends the the Planning Commission deny the change of zones from MXCD (Mixed-Use Corridor District) to MXCD-HD (Historic District) due to not meeting criteria for the designation.
Background:
In April 2021, the property owner’s representative applied for an Evaluation of Significance by the Historic District Commission (HDC), as required for property in the City of Rockville proposed for demolition and found to need HDC review based upon the required Natural Resources Inventory (NRI).
On May 20, 2021, staff presented its report on the Evaluation of Significance to the HDC and recommended denial for historic designation. Staff found that although the property includes certain features reflective of Post-World War II commercial development from the 1960s, there are numerous examples of these types of structures within Rockville. Further, given the market decline for stand-alone retail stores, particularly in locations not oriented toward pedestrians and bikers, there is low probability that the building, if preserved, would serve a viable future use.
The Mayor and Council will hold a public hearing, at which time they will receive testimony from the public and the recommendations from the Historic District Commission and the Planning Commission. The Mayor and Council will make the final decision on the proposed rezoning based on the public record and any other relevant information.

History of the Site:

The Post-World War II era gave rise to residential and commercial development in Rockville, including new shopping centers and strip malls along Rockville Pike and other major roads.
Hungerford Drive was completed in 1951, and it gradually became a successful commercial district. In June 1965, Leonard Kapiloff, operating as President of Lennard Enterprises, Inc., purchased property along Hungerford Drive from Charles A. Froman and his wife, Lora.
The land included parts of tracts of land called “Exchange and New Exchange Enlarged,” and “Valentines Garden Enlarged.” Two months after acquiring this property, Leonard Kapiloff and Vernon E. Miller registered as Trustees for Hungerford Associates. In 1967, Hungerford Associates platted a portion of the property which became the subject property, Lot 6, of City Center Subdivision .
That same year, Morris Stern opened Stern’s Furniture at 430 Hungerford Drive (now Walgreens, south of the subject property), in a new furniture showroom designed by prominent local architect, John H. Sullivan.
Also in 1967, Irvin Schwartz, President of Youth Center, Inc. and Colony Shop, Inc., purchased Lot 6 from Hungerford Associates, and in 1968, Sullivan designed the new children’s clothing store, “The Colony Shop,” at 460 Hungerford Drive.
The architect for the subject building, John Henry Sullivan Jr. (1925-2014) was born in Washington, DC and moved to Montgomery County in 1928. John “Jack” Sullivan graduated from Bethesda-Chevy Chase High School, after serving in World War II, and graduated from the Catholic University School of Engineering and Architecture. After working for several architectural firms, he opened Sullivan and Associates in 1957 in Rockville, where it was based until 1970. During Sullivan’s career, he designed banks, churches, schools, and public and institutional buildings. He also designed his family residence in Potomac, Maryland.
John Sullivan was an award-winning modernist architect, who was known for his ability to use brick to create surface texture and clear structural definition. His buildings had strong lines and geometric shapes. One of his award-winning projects was the Humble Car Care Center (1970) on Hungerford Drive, near the Colony Shop and Stern’s Furniture. The building had dramatic split gables that rose high above the building. Humble Car Care Center w as demolished in the 1980s to make way for construction of the Rockville Metro Station.
John Sullivan designed many buildings in Rockville, including the County Federal Savings and Loan building (1962), the Tenley Building (1964) and the award-winning Aspen Hill Library (1967). He also designed municipal buildings for the City of Rockville including the Elwood P. Smith Recreation Center (1959), and the Rockville Municipal Swim Center (1968). During the 1970s, as the president of SMS Design Group of Bethesda, Sullivan’s work included projects in the I-270 Research Corridor such as the Hoover Building (1969), DANAC Ocean Science Building (demolished, 1970), Hewlett-Packard (1972) and the Lingerfelter Building (1973).
In 2009, Mr. Sullivan and his lifelong friend and fellow Rockville architect, John Samperton, were featured in Peerless Rockville’s and Rockville 11’s award-winning multi-media documentary, “A Pair of Jacks.” The movie highlighted their lives, their careers, and the many contributions to Rockville’s mid-century modernist heritage. John H. “Jack” Sullivan Jr., died on June 17, 2014 in Rockville, at the age of 88.
The ownership of the subject property is not found to have any important association with a significant person.
No information was found on Irvin Schwartz, President of Colony Shop, Inc. and Youth Center, Inc. Colony Shop may have been a retail chain or franchise; however, no information was found to confirm that. The store opened as a women’s clothing retailer and expanded to nine stores throughout Arkansas, and one store in Tennessee. Wynne, Arkansas may have been the company’s headquarters, where a large distribution center, now closed, used to be located.
There are several Colony Shops still in existence throughout t he country, some with the name “The Colony Shop, Inc.,” or “The Old Colony Shop, Inc.,” or “The New Colony Shop, Inc.” They all seem to sell clothes of a different variety, and may, or may not be associated with the Colony Shop, Inc. store that was located in Rockville.
Irvin Schwartz’s name is the only name that is associated with the Colony Shop in Rockville from its debut in 1968, to the forfeiture in 1987.
In October 1985, the property transferred back to Hungerford Ltd. Partnership, Leonard Kapiloff, Trustee. In February 1995, the property was sold to Maxim Enterprises, Inc. Tien L. Chang was listed as the company President.
The property is currently owned by Asian Square, LLC, and Zheng Hai Zheng is identified as the Manager. The building was an Asian Supermarket for many years, but it closed for business in 2019 and has remained vacant since that time.

Montgomery County’s Juneteenth Celebration: Freedom at The Rock Event This Saturday in Germantown