Rep. Carolyn B. Maloney, Chairwoman of the Committee on Oversight and Reform, and Rep. Raja Krishnamoorthi, Chairman of the Subcommittee on Economic and Consumer Policy, sent a letter to National Football League (NFL) Commissioner Rodger Goodell requesting documents and information regarding the Washington Football Team’s (WFT) hostile workplace culture and NFL’s handling of this matter.

“The NFL has one of the most prominent platforms in America, and its decisions can have national implications,” the Chairs wrote. “The NFL’s lack of transparency about the problems it recently uncovered raise questions about the seriousness with which it has addressed bigotry, racism, sexism, and homophobia—setting troubling precedent for other workplaces. The Committee is seeking to fully understand this workplace conduct and the league’s response, which will help inform legislative efforts to address toxic work environments and workplace investigation processes; strengthen protections for women in the workplace; and address the use of non-disclosure agreements to prevent the disclosure of unlawful employment practices, including sexual harassment. We hope and trust that the NFL shares the Committee’s goal of protecting American workers from harassment and discrimination.”

On July 1, 2021, the NFL announced the outcome of the WFT investigation in a press release, which described vague and conclusory findings, including that “the workplace environment… particularly for women, was highly unprofessional,” that “[b]ullying and intimidation frequently took place,” and that “senior executives engaged in inappropriate conduct themselves.” The NFL did not disclose the full results of the investigation.

The Wall Street Journal recently reported the WFT probe raised issues beyond the scope of the underlying investigation. Leaked emails between WFT official Bruce Allen, former NFL coach Jon Gruden, and others obtained during the course of the NFL’s internal investigation exposed workplace cultures within the NFL filled with racism, misogyny, and homophobia. These emails also raised questions about the league’s impartiality in conducting internal investigations.

The Chairs have requested documents and information related to the investigations by November 4, 2021. 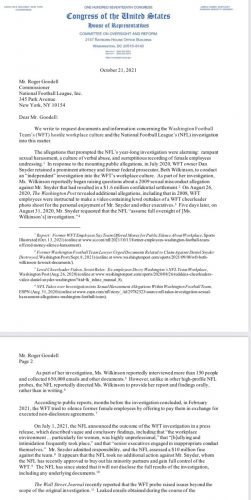 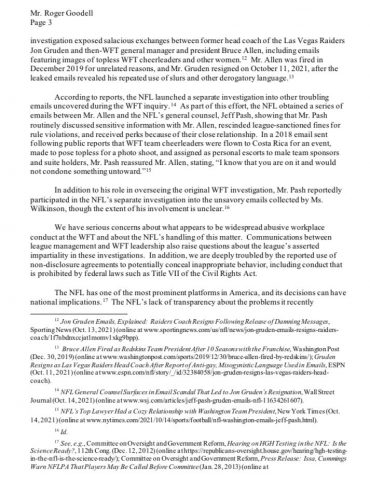 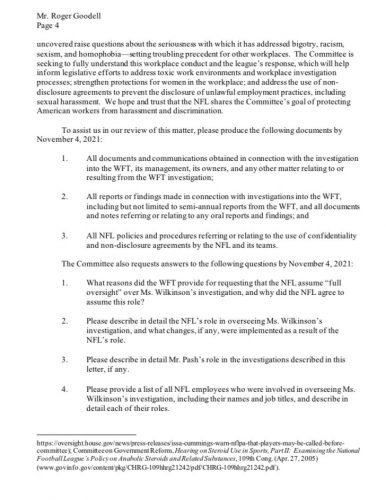 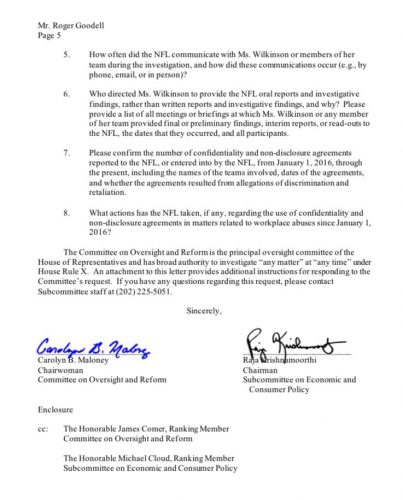 Beyond MoCo: Tysons Corner Center Being Cleared After...