How Black Hill Park Got its Name– Was There Ever Gold There?

When George Chadwick bought a farm north of Germantown in 1947, the last thing he expected to find was gold. But as he surveyed his new property he found numerous deep pits, which he found out after talking to his neighbors, were gold mines. The locals also said that they never heard of any amount of gold coming out of these mines.

George was more interested in dairy farming than in mining for gold, so he filled in all the holes, except for one, which he turned into a bomb shelter. This surviving gold mine now sits opposite the house that he built from local fieldstone that now serves as the Park Office for Black Hill Regional Park. Montgomery County purchased Goldmine Farm from Mr. Chadwick in 1965 and it now makes up almost half of the park.

Gold fever hit Montgomery County after the Civil War. A group of Union soldiers from California discovered flecks of gold in the sand near their camp at Great Falls while washing their dishes. They did not tell anyone about their find at the time, but came back to the area after the war and quietly bought up land and formed the Maryland Mining Company. This first company never found much gold with its single shaft, but later shafts dug by other companies in the area produced a fair amount of gold. There was also a gold mine over in the eastern part of the county near Olney – on Gold Mine Road.

The underground rock formation that the gold was found in is called the Appalachian Gold Belt and extends all the way from Georgia to Maryland. Fingers of this formation extend throughout Montgomery County. No commercial mines like those at Great Falls and Olney were established in this area, but there are several places where people tried panning for gold in the streams or digging pits with picks and shovels wherever the right type of rock was found.

The right type of rock is schist mixed with veins of quartz. This is the kind of rock making up the walls of the walls, 10 feet by 10 feet, of the 20-foot deep pit in front of the Chadwick house. It is not known how far back the gold mining pits at Black Hill Park were dug, but, judging by the size and evidence that they were dug without machinery, they may date back to the late 1800s or early 1900s. Many people have searched, but no one has been able to find any gold recently at Black Hill Park. If there ever was any gold, it has long since been found and taken away.

You can see the historic marker and the sealed opening of the last mine at Black Hill Park across from the Park Office off the main entrance road.

After retiring from farming George A. “Jay” Chadwick lived in Boyds until his death in 2001. He was intensely involved with the Boyds community, helping to found Boyds Credit Union, a day care center and a local organization for underprivileged youths. A former lawyer, he donated many hours of service to the Boyds Civic Association. 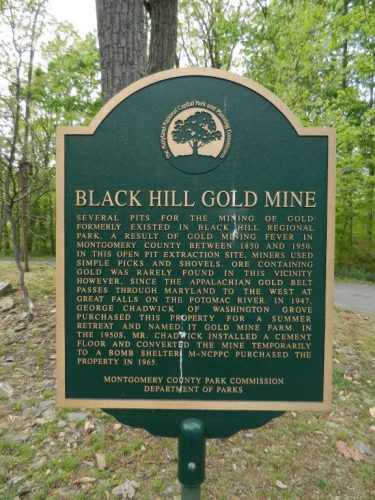 Update on Double Shooting in Germantown That Left...

Naz’s Halal to Give Away Free Food From...

Did You Know You Can Rent a Castle...