Issa Rae, Who Grew Up in Potomac, Ends Successful Five-Year Run of Her Show ‘Insecure’

Issa Rae was born in Los Angeles. After moving to Senegal for a couple years where her father, a pediatrician,  attempted to open a hospital, her family moved to Potomac, Maryland.

While growing up in Potomac, she was in a gifted and talented program at Cold Spring Elementary School. Rae was quoted as saying that in her time in Potomac, she grew up with “things that aren’t considered ‘Black,’ like the swim team and street hockey and Passover dinners with Jewish best friends.”

“It was like living in a Saturday-morning ‘Saved by the Bell,’” Rae recalled in an interview with The Washington Post. “I had friends from every ethnicity. I went to a gifted and talented school with a bunch of nerds. It was great.”

The WaPo interview identified her years in Potomac as providing a touchstone for her. “Being black there was easy,” she wrote in an essay for the Huffington Post about racial identification. “I never really had to put much thought into my race and neither did anybody else. I knew I was black. I knew there was a history that accompanied my skin color and my parents taught me to be proud of it. End of story.”

Even her hair was a matter of pride when she lived in Potomac, she said in a piece written for Transitioning Movement, an offshoot of the beauty Web site Carolsdaughter.com. Having ethnically diverse friends “was great for my self-esteem. I was celebrated for being different; for having superhero hair that defied gravity and recoiled with lightning speed elasticity. My hair texture was the subject of awe, confusion and probably envy. I loved it.” 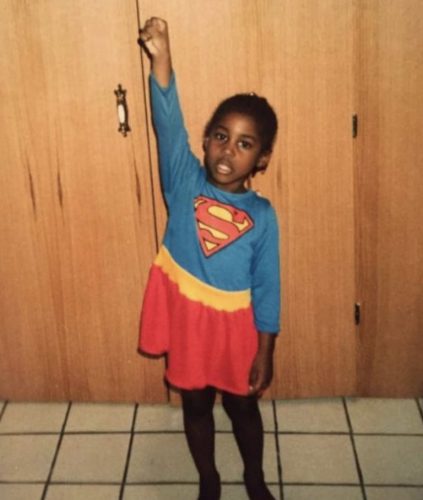 Rae and her family moved back to Los Angeles after she completed elementary school, which ended her time in Montgomery County. She remained in LA with her family for the majority of her teenage years. She graduated from King Drew Magnet High School of Medicine and Science, where she started acting and went on to attend and graduate from Stanford University with a Bachelor of Arts in African and African-American Studies. As a college student, she made music videos, wrote and directed plays, and created a mock reality series called Dorm Diaries for fun. At Stanford, Diop met Tracy Oliver, who helped produce Rae’s YouTube series, Awkward Black Girl (which was the pre-cursor to Insecure), and starred on the show as Nina.

Issa Rae has achieved wider recognition as the co-creator, co-writer, and star of the HBO television series Insecure, for which she has been nominated for multiple Golden Globes Awards and Primetime Emmy Awards. In 2018 she was one of Time Magazine’s 100 Most Influencial People. She also recently starred in the popular movie The Photograph.

Insecure ended its 5-year run earlier this week. The series has received rave reviews and the Boston Globe recently lauded Rae for using the series to show people that they can be their authentic self without worry. “It’s always been a show about growth” Rae said in a recent interview with Vulture. Rae has achieved heights the little girl from Cold Spring Elementary School would be proud of.

Family Displaced After House Fire in Potomac on...

Many Upcoming Openings at Park Potomac; At 100%...