The Truck Will Host Regular Hours in Montgomery County, Md. As Well As Private Events

Today, Chef Jarrad Silver announces the launch of his new food truck, Silver and Sons BBQ to debut in the parking lot of Captains Market at 7607 Macarthur Boulevard in Bethesda, Maryland on March 12. Silver’s take on barbecue is heavily influenced by his Jewish upbringing and professional training in the kitchens of local Mediterranean restaurants. In addition to being stationed at Captains Market, Silver and Sons BBQ is also available through pre-orders, neighborhood deliveries, and private catering.

“Silver and Sons BBQ started during the pandemic when I began cooking for friends and family in my driveway in Kensington,” says Silver. “Eventually, I was asked to go to other neighborhoods, so I would set up folding tables and a canopy and serve barbecue to nearby neighborhoods from my trailer smoker. I have always wanted to create something for myself, and with the shift in the restaurant industry during the pandemic, I have been able to put a lot more focus on the direction that I want to go moving forward. I ordered a truck to take the concept to the next level; beyond just online ordering and private events.”

A native of Bethesda, Maryland, Silver learned to cook from his father and grandmother, focusing on comfort foods. He went on to helm local kitchens serving Mediterranean, Mexican, and Middle Eastern cuisines, most recently as executive chef for Neighborhood Restaurant Group at Birch & Barley. From these experiences, he has created a unique flavor profile for Silver and Sons BBQ. Silver has intentions of finding a brick-and-mortar location in the future.

Unlike traditional barbecue, Chef Silver’s cuisine is influenced by Mediterranean flavors and a cooking style developed over the last 15 years working in the kitchens at local D.C. establishments. Expect main dishes like short rib pastrami, brined for seven days, and pulled lamb shoulder with garlic-ginger crust. And he doesn’t skip traditional barbecue items, with baby back beef ribs and Freebird Amish chicken. While barbecue is the star of the show, the menu also leans heavily on seasonal vegetables, with sides on the lighter side using fresh juices, spices, and herbs to balance out the richness of the proteins. This season’s highlight includes a chickpea napa cabbage slaw with cucumber, red onion, roasted peppers, lemon vinaigrette. Silver also has a selection of sides and desserts that are heavily influenced by his Jewish background like lemon schmaltz potatoes, brisket chili, and babka bread pudding. The menu includes a section of savory items like chicken pot pie and lamb shepherd’s pie topped with parmesan mashed potatoes. Every order of barbecue comes with pickled vegetables, fresh challah bread and sauces.

Barbecue proteins are sourced from quality farm-driven vendors with responsible practices, and in his smoker, Silver uses Virginia oak and hickory wood that he cuts himself from trees at his in-law’s farm in Central Virginia. All spices, rubs, and sauces are made in-house using whole ingredients to produce more aromatic qualities. Based on his grandmother’s recipe, Silver makes house-made challah bread daily, which is used in place of traditional barbecue white bread.

Prior to this launch,  Silver and Sons BBQ was available for pre-order online for pickup in Kensington. With the new truck, Silver and Sons BBQ will be parked at Captains Market, Wednesdays and Saturdays, 4:30-7:30pm. Customers can walk up to the truck or pre-order online for pickup. Thursdays and Fridays, Silver plans to do various drops around neighborhoods in Montgomery County, the most up-to-date locations will be released each week via email and social media. Private catering is also available for small and large-scale events.

Jarrad Silver is the chef and owner of Silver and Sons BBQ, a Maryland-based Mediterranean-style barbecue concept founded in 2020. In 2022, Silver launched a Silver and Sons food truck expanding his offerings around the area. Prior to founding Silver and Sons BBQ, Silver worked as the executive chef for Neighborhood Restaurant Group, running the kitchen at concepts Birch and Barley and ChurchKey. Silver also served as executive chef for Mike Isabella Concepts helping open eight restaurants over seven years. Silver is a native of Montgomery County, Maryland and learned to cook at a young age from his father and grandmother. 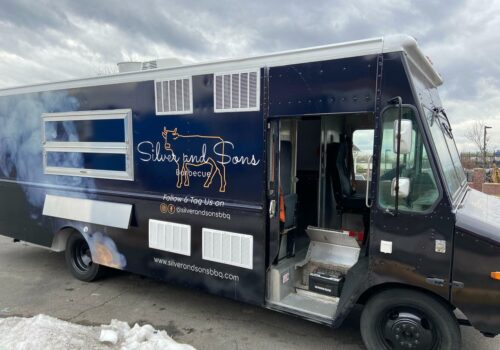