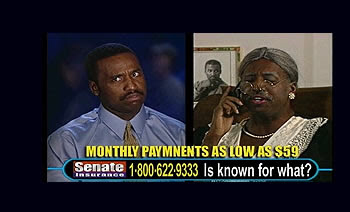 Kiss my bumper…just kiss it!

Many of you probably remember comedian Howard G from his Senate Auto commercials in the 90s.
We caught up with him back in 2018 to learn a little more about him and see what he’s up to now.
Howard is from Baltimore and has been doing comedy for nearly 30 years!
One night back in 1994, he was driving back home from doing some shows in New York and New Jersey when his agent called him and told him to hurry up and get to a Holiday Inn in Glen Burnie, where Senate Auto was holding auditions for their upcoming round of commercials.
When Howard got there he saw local personalities like Tony Perkins and Donnie Simpson auditioning, so he knew this was a big deal.
He made up his now famous “Kiss my bumper!” slogan right there on the spot during his audition and was immediately told that he was exactly what they were looking for. Here we are… 25 years and 30 commercials later.
Howard has continued his career as a professional comedian and playwright. He has done more local and national commercials, performed on HBO’s Def Comedy Jam and The Wire, and has opened up for Patti LaBelle, Martin Lawrence, Dave Chapelle, The Temptations, and more.
You can check out his website at www.ComedianG.com

Be the first to comment on "Kiss My Bumper…Just Kiss It!"