The most recent maps from the National Weather Service shows quite a difference from their “reasonable worst case scenario” to the “low end amount” showing just how much uncertainty there is with this storm. 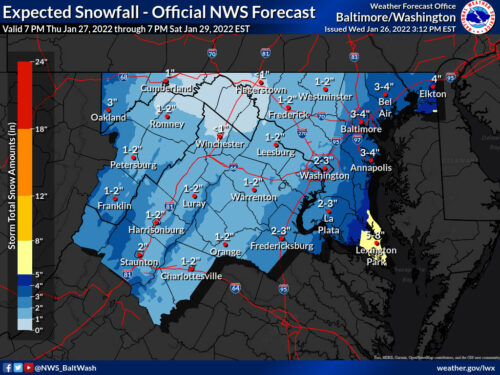 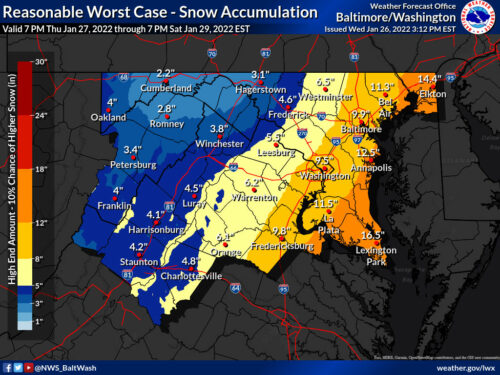 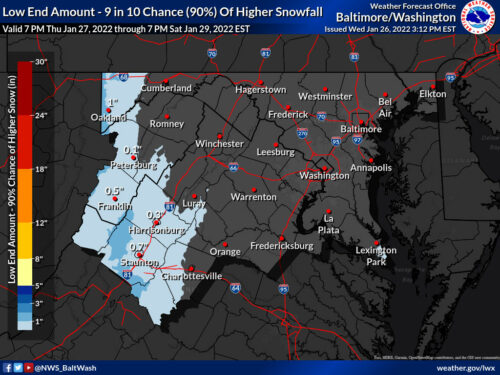 As you can see above, most of MoCo is in the 1-2 inch range , but the “reasonable worst case scenario” has MoCo at about 5.5-10 inches while the “low end amount” has us getting no snow at all. That’s a range of 0 to 10 inches!

With so much uncertainty, timing beyond “Friday into Saturday” will become a bit clearer tomorrow.

The forecaster’s discussion shows that the NWS is encouraging people to focus on the high and low end amounts:

The evolving large scale weather/jet stream pattern across the U.S. as well as latest model guidance continue to suggest the potential of a major, rapidly deepening area of low pressure moving northward off the East Coast Friday into Saturday. Although the brunt of the storm looks to be headed for New England, the Mid-Atlantic region will be on the western periphery of the rather large system resulting in an increasing likelihood of accumulating snow. Uncertainty remains in the all important details, and users are encouraged to focus on the broader “low-end” and “high-end” potential snowfall amounts at this time range, with the caveat that the situation is still evolving, the storm has yet to form, and continued variability is likely in the “expected” snowfall amounts as finer scale details come into clearer focus over the next couple of days.