Laytonsville’s Katie Killacky and Her Two Daughters Can be Seen in Hulu’s Dopesick; Killacky Also Has a Recurring Role in Apple TV’s Swagger

Last summer Katie Killacky and her daughters, Annie and Maggie Toomey, filmed an episode of Dopesick for Hulu. Killacky played the role of one of the nurses for John Hoogenakker’s character, Randy Ramseyer. Her daughters played a set of sisters in an unrelated scene. 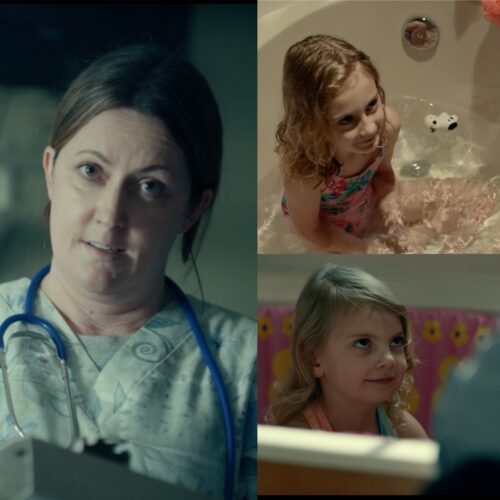 Killacky is an acting teacher who has run an acting school, Capital Coaching Studio, out of her home in Laytonsville for the last 6 years. She has appeared in over 30 local, regional and national commercials including Toyota, McDonald’s, Mervyn’s, TJ Maxx and Colonial Williamsburg. In addition to Killacky and her daughters having small roles in Dopesick, a handful of her students were also on the show. In her time as an acting teacher in the area she has had students on productions that shoot and previously shot around here, such as We Own This City, Servant, Homeland, House of Cards. A lot of her students also work in other areas on the east coast, like New York and Atlanta.
Currently Killacky has a recurring role in the Apple TV series Swagger, based on on Kevin Durant’s life growing up playing AAU basketball in the DMV. The show centers around the kids on the basketball team and Killacky plays the role of one of the player’s moms. The show started filming in June of 2019, when the pilot was shot. Filming picked back up end of 2019 only to be shut down by Covid, before finishing filming in  March of 2021, which required Killacky and the cast to quarantine in Richmond for about 4 months other than getting to go home for a week at a time. Due to the amount of time and work put into filming across two years, and how much the show itself means to her, Killacky calls her role in Swagger her favorite to date. The show is currently waiting to hear if it will be renewed for a second season.
“Being able to see other actors in this market see their dreams come true, even if it’s 2 or 3 lines on a show, is my greatest joy. A lot of my students are retired professionals who maybe wished they had pursued a career and are doing it in their “second act” of life. We’re certainly not the main hubs like Atlanta or NYC or LA so we’re subject to a lot of droughts and downtime so everyone who does it has to really love it and we’ve built quite a community here. I feel very fortunate to do what I do.” she told us.

A Few Good Men…One of Them From MoCo

MCFRS Respond to House Fires on May 23...