On July 31 at the Nashville Fairgrounds in Nashville, TN, 73-year-old professional wrestler Ric Flair, real name Richard Fliehr, will be making his return to the ring for one last match at an event titled Starrcast V.  One person who isn’t excited about the Nature Boy’s return to the ring is CBS radio anchor and part time news writer for WTOP  Christopher Cruise. Wrestling fans will remember Cruise as a play-by-play commentator and interviewer for World Championship Wrestling during the late 80’s and early 90’s. Cruise argues that a man Flair’s age , with serious health problems, should not be allowed to compete.

Prior to this summer’s upcoming event, Flair’s last wrestling match took place in Orlando, FL against a man called Sting at a TNA wrestling show in September 2011. Though he hasn’t wrestled in nearly 11 years, Flair has made many appearances on various wrestling programs, including WWE, in recent years. Reaction to the announcement of Flair’s upcoming match has been mixed.

In 2017, Flair was placed in a medically induced coma to undergo emergency heart surgery and have part of his bowel removed due to decades of alcohol abuse.  After a different heart surgery in 2019, Flair told TMZ, “This is the 4th time I’ve been in in 7 weeks,” and “They finally figured out what type of pacemaker to put on me. Which I found out just how important the operation of your heart is. You can’t breathe if your hearts not working.” 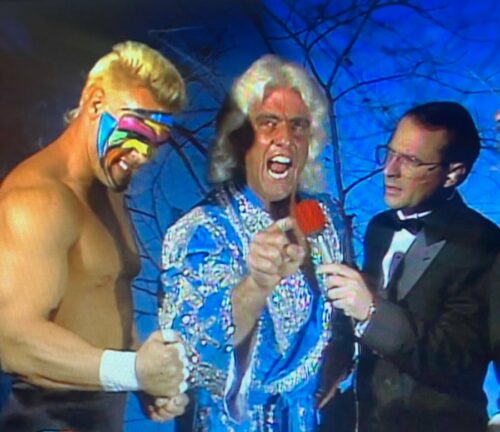 Prior to the announcement that Flair’s latest retirement match would be taking place in Tennessee, Cruise wrote to the Maryland State Athletic Commission, urging its members to deny Flair a license if he ever attempted to wrestle in the state. Cruise wrote, “I am writing as a citizen of Maryland to express my concern about the prospect of Mr. Fleihr being granted a license to wrestle in this state. I’m sure you understand how disastrous it would be for the Commission if he died in the ring during a performance for which you granted him a license.”  This wasn’t the first time Cruise has contacted the Maryland commission regarding wrestler safety.  After a 2019 match in Baltimore between AEW wrestlers Kenny Omega and Jon Moxley that involved broken glass and barbed wire, Cruise made headlines when he filed a formal complaint with the commission. The AEW wrestling promotion ended up receiving a $10,000 fine for the match, although Cruise states that the commission had a representative on-site at the event and said it had already been considering taking action before his complaint.

Earlier this week, Cruise shared an email he sent to the four commissioners of the Nashville Fairgrounds and the mayor of Nashville, urging them to cancel the match:
“The 73 year old professional wrestler Ric Flair, who has a pacemaker installed, will be having his last match at The Fairgrounds in late July.
Were you aware of this?
I am a former play-by-play announcer for World Championship Wrestling. I am deeply concerned about Mr. Flair’s health. I think you should be, too.
What if he dies in the ring (something he has reportedly professed he wants to do) during the match at The Fairgrounds? Can you imagine the lawsuits, the bad publicity? It would be impossible for you to explain. You would be pilloried nationally and internationally.
This is a bad idea all around.
Unfortunately, the Tennessee State Athletic Commission does not regulate professional wrestling, so you are the only ones who can stop this from happening at The Fairgrounds.
Please cancel this event. It isn’t worth the risk involved. If something happens to Mr. Flair during the event, The Fairgrounds will be held up to ridicule worldwide, justifiably so.”

At this point it appears that despite Cruise’s efforts, Flair’s retirement match will go on as scheduled in July. Information about the event can be found at www.starrcast.com/ric-flairs-last-match.  Besides his work for CBS and WTOP, Cruise teaches classes at the Oasis center in Bethesda and at The Graduate School USA in DC. He is a retired federal employee and a wrestling fan for over 50 years, having worked for both the WWF and WCW.

Rocket Lab’s Electron Launch to Be Visible on...

AFI Silver is Teaming With George Pelecanos to...

Christopher Cruise is Just a Idiot … A News Anchor following his lead what a Joke.