Today in the Circuit Court for Montgomery County, MD, Judge Chris Fogleman sentenced defendant, John Tomlinson, 29, to 30 years suspend all but 15 years in prison. Ten of those years are mandatory meaning he won’t be eligible for parole until after then. Judge Fogleman also ordered 5 years supervised probation upon Tomlinson’s release. Tomlinson pleaded guilty to charges of attempted second-degree murder and prohibited person in possession of a firearm on August 25th. This stems from an incident on Dec. 13, 2021 at 2:14 a.m. in the area of Thayer Avenue and Manor Lane (video below).

A man, later identified as John Tomlinson, saw a driver collide with his friend’s vehicle parked on Manor Lane. As Tomlinson’s friend engaged in an altercation with the driver, Tomlinson ran down the street, retrieved a handgun from another vehicle and then returned to the scene firing off nine gunshots, hitting the vehicle, street signs and at least five businesses on Bonifant Street. Miraculously no one was injured. Video from a Tesla parked nearby was used along with area surveillance video to identify Tomlinson and he was in possession of a firearm when he was arrested the following month.

Assistant State’s Attorneys Teresa Casafranca and CJ Herbert, a member of our Silver Spring Crime Suppression Task Force, prosecuted this case. “When we have a case like this where someone came forward to share evidence and enabled us to hold the defendant accountable for putting lives in danger, it’s a great message. We thank the owner of the Tesla for cooperating with law enforcement and helping to make the community safer,” said State’s Attorney John McCarthy.

Original press release: Detectives from the Montgomery County Police Department – 3rd District Investigative Section have arrested and charged 29-year-old John Tomlinson for a December 13, 2021 shooting in downtown Silver Spring. On December 13, at approximately 2:14 a.m., 3rd District Officers responded to the area of Thayer Ave. and Mayor Lane for the report of a shooting that just occurred.

The investigation by detectives has determined that an individual, later identified as John Tomlinson, observed an impaired driver colliding with his friend’s vehicle parked on Mayor Lane. Tomlinson observed his friend engaging in a physical altercation with the driver of the striking vehicle. Tomlinson ran down the street, retrieved a handgun from another vehicle, and returned to the scene. He then fired multiple rounds at the victim driver, striking his vehicle, street signs and at least five businesses on Bonifant St. The victim was not injured.

During the course of the investigation, Tomlinson was identified as a potential suspect. Probable cause was developed to charge Tomlinson with attempted first-degree murder and illegal possession of a firearm via an arrest warrant. On January 31, 2022, undercover detectives observed Tomlinson leaving Society Restaurant & Lounge in downtown Silver Spring. Detectives followed Tomlinson as he was approaching a vehicle. Tomlinson noticed that he was being followed by detectives and attempted to flee the scene, but he was quickly apprehended. Two firearms were recovered from this vehicle, which had been reported as stolen out of Loudoun County, Virginia.

Tomlinson was transported to the Central Processing Unit, where he was also charged with firearm possession with felony conviction, loaded handgun in vehicle and unlawful taking of a motor vehicle. He is being held without bond. 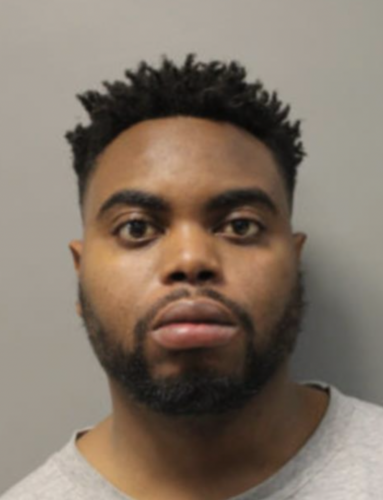