Montgomery County Fire and Rescue Services responded to a 2-Alarm on Wednesday night around 11pm at the Georgian Woods apartment complex at 2370 Glenmont Circle in Glenmont. According to Chief Spokesperson for MCFRS Pete Piringer, the fire originated in a couch on the building’s exterior. The fire rapidly grew and spread to a utility closet, which is a common causeway for HVAC throughout the building, and quickly extended (vertically) into interior.
Around 95 firefighters responded to the scene.  Sixteen adults and five kids have been displaced and there were no serious injuries reported. Damages are estimated to be around $600,000.
Per mcfrsPIO on twitter: “(~11p 10/5) 2-Alarm, 2370 Glenmont Circle, near Georgia Av, Georgian Woods, 3-sty garden apt; origin & cause, building exterior (couch) rapidly grew, spread to utility closet, to common causeway for HVAC thru out bldg, quickly extending (vertically) into interior;ICYMI (10/5 Wednesday nite ~11p) Glenmont Circle, @mcfrs firefighters arrived to encounter a rapidly advancing fire, smoke alarms activated & alerted some residents while others were safely assisted out, no serious injuries reported, >2 dozen residents displaced @MontgomeryCoMD” 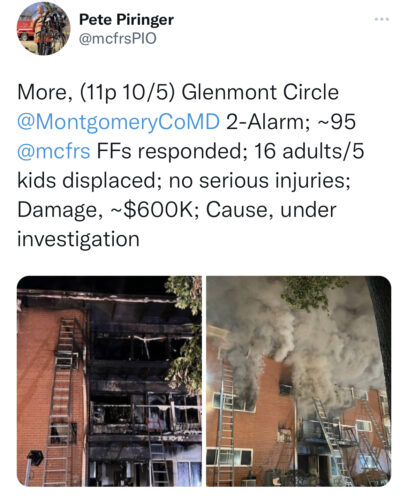 A 19-Year-Old Bicyclist Has Died From Injuries Sustained...