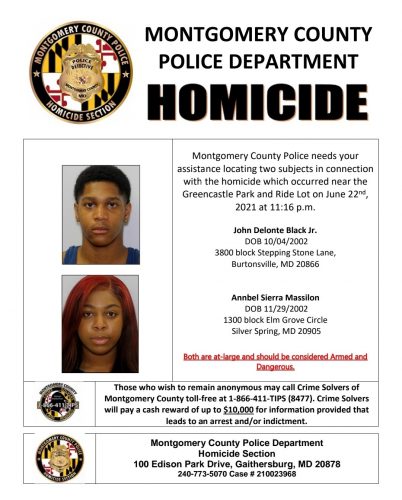 Montgomery County Police is asking for the public’s assistance in locating John Delonte Black, Jr. and Annbel Sierra Massilon, wanted in connection with a homicide on June 22.

Detectives from the Major Crimes Division are investigating the homicide of 18-year-old Kennedy Merrit-Millet of Rockville. At this time, Investigators do not believe this was a random incident.

On Tuesday, June 22, at approximately 11:16 p.m., the Emergency Communications Center (911) received a call for the report of a shooting in the area of Greencastle Road and Turbridge Drive in the Fairland area.

Third District officers responded to the area and located Merrit-Millet laying in the intersection of Greencastle Road and Turbridge Drive suffering from an apparent gunshot wound. Officers initiated lifesaving measures on Merrit-Millet until Fire and Rescue personnel arrived. Merrit-Millet was transported to a local hospital where he succumbed to his injuries.

The Department urges anyone who has information about this homicide or involved suspect(s) to call the Major Crimes Division at 240-773-5070 or Crime Solvers of Montgomery County toll-free at 1-866-411-TIPS (8477) or submit a tip online or via the P3 Tips app.