Per the Maryland Office of the Attorney General: “The Independent Investigations Division (IID) of the Maryland Office of the Attorney General has identified the involved deputy in the fatal officer- involved shooting in Montgomery County on July 20. The involved deputy has been identified as Deputy Sheriff III Domenic Mash of the Montgomery County Sheriff’s Office. Deputy Mash is a 9.5-year veteran assigned to the U.S. Marshals Capital Area Regional Fugitive Task Force (CARFTF).”

According to the Attorney General’s office, a deputy sheriff assigned to the U.S. Marshals Capital Area Regional Fugitive Task Force (CARFTF) was serving an arrest warrant in the 100 block of Garth Terrace in Gaithersburg. During the execution of the warrant, the deputy discharged their firearm, fatally injuring the wanted man. A second man was shot and taken to an area hospital to be treated for his injuries.

Montgomery County Sheriff Darren Popkin said the man was running after the officers at full speed with a knife in hand. “The suspect came out of that window brandishing the knife and was coming right toward the sheriff’s deputy and others. They tried to retreat and they tried to make space. That’s what they are taught in training, is to try to make space and time, but unfortunately that distance was closing quickly. They tried to use a Taser. That didn’t work”, said Popkin.

The Montgomery County Sheriff’s Office said the man killed was 35 years old and his identity has not yet been released. The FBI is currently handling the investigation due to the involvement of U.S. Marshals. According to an NBC Washington report, Capital Area Regional Fugitive Task Force officers do not wear body cameras. 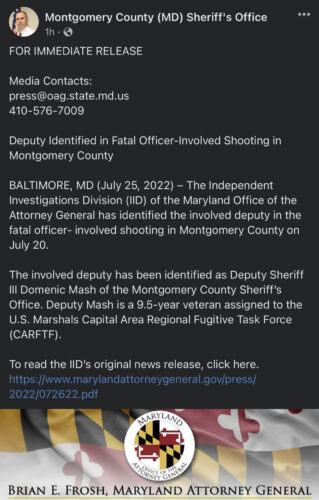