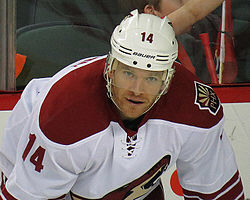 Jeff Halpern, formerly of the Washington Capitals (and many other NHL teams), attended Churchill High School in Potomac. He later transferred to St. Paul’s in New Hampshire so he can play high school hockey, before attending Princeton.

He first played in the NHL with the Caps in 1999, when he became the first D.C. area player to ever play for the Caps.

Be the first to comment on "MoCo Athletes: Jeff Halpern (NHL)"