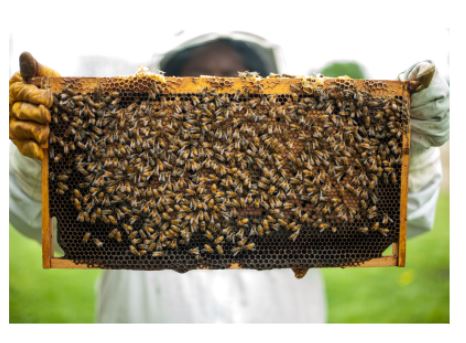 The Montgomery County Beekeepers Association have announced that Zachary Lamas is the 2021 recipient of their Bee Impact Grant Award for his work on “Nano-Colonies”.

Details on Zac’s work below. 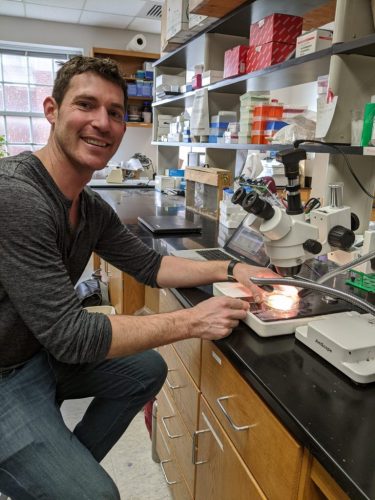 The $5,519 grant will help Lamas continue development of his recent breakthrough,
“Nano-Colonies,” a laboratory technique that makes honey bee research more efficient,
exponentially more affordable, and highly targeted. “Now we can study the effects of an
isolated chemical, for example a fungicide, with the control of a laboratory environment,
but with many of the colony-like characteristics that we would see in the field,” says
Lamas.

“Normally, honey bees won’t raise babies, or a new queen, unless their colony has many
thousands of workers,” says MCBA President Pam Hepp. “Lamas’ nano-colony setup
convinces them to go about their business, even when there are only 100 bees present.”

Nano-colonies make it far easier to observe individual bee-to-bee interactions, and to
study factors affecting bees, one variable at a time. Evaluating how queen development
is affected by specific pesticides, or by specific parasites, like the Varroa destructor mite,
are two such research areas important to reducing honey bee losses.

“My hope,” says Lamas, “is that other researchers will adopt my nano-colony method to
successfully rear honey bee queens in the lab. This will enable more studies to be
undertaken at a much lower cost, so our knowledge base will grow more quickly.”

“We’re proud of how MCBA members have stepped up to fully fund the next phase of
Zac’s important work,” says MCBA Vice President, Eric Malcolm. “Donating isn’t
always easy, especially during Covid, but our community pulled out all the stops. Several
members set up matching funds, offered services, or gave in-kind donations to encourage
others to give. This is our second year, as a beekeeping community, collecting donations
to support local honey bee research to help make a difference where we can. We believe
this year’s awardee, Zac Lamas, is going to have a big impact on bee research for years to
come.”

Zachary Lamas is a PhD student in the Hawthorne Lab at the University of Maryland
Entomology Department. In addition to his novel method for rearing honey bee queens in
the lab, he also researches pesticide and virus issues as well as the feeding habits of the
parasitic Varroa destructor mite. He was also the recipient of the 2019 PAm-Costco
Award. He has written many articles contributing to the beekeeping community in
magazines such as Bee Culture and Bee World.

The Montgomery Country Beekeepers Association was incorporated in 2010 after
decades of meeting informally. Its Bee Impact Grant program was inaugurated in 2020.
The first recipient was Dr. Samuel Ramsay in support his research in Thailand on the
Tropilaelaps mite that parasitizes honey bees.

Construction Progressing on the New Avocet Tower in Downtown Bethesda