Top Posts
Beyond MoCo: 13-Year-Old Brings Loaded Gun to Prince...
Beyond MoCo: A Joint Statement from Governor Wes...
MCFRS Respond to Fire at Sardi’s in Gaithersburg
Update: 16-Year-Old Shot in Germantown
MCPD on the Scene of Shooting in Germantown...
Nava Thai Has Closed
Detectives From Special Investigations Unit are Asking For...
Beyond MoCo: Maryland State Police Seeks Assistance In...
Suspect Arrested in Connection With Germantown Shooting
Montgomery Parks Honored With International Digital and Video...
GaithersburgUp County

From the Montgomery County Sentinel in 1876: “As the story goes, during the Civil War a soldier was decapitated by a saber in a skirmish around what is now Game Preserve Road. After the fight, his fellow soldiers hastily buried him in an unmarked grave, even though they couldn’t find his head to bury with his body.”

The story has been passed down for many generations and many have told tales about the supposed unmarked grave of the headless man. Some have recalled strange noises and apparitions with glowing eyes. Others have seen the figure of a headless soldier (sometimes on a horse and sometimes without it), while many have driven down the Gaithersburg road several times and have stated they’ve never noticed anything out of the ordinary. Below you’ll see a few responses to this story in years past:

“i’ve never seen anything and i used to drive this road every day/night.”

“Grew up on this road. Scariest thing there was me. I was a terrible, terrible teenager.”

“I’ve experienced weird things on this road twice. We turned off the car once right below the bridge and it got super cold extremely quick. Then we head noises we immediately turned on the car and left. The second time we saw a woman walking up the hill long hair what it seem like a nightgown looking down as she was walking scared the hell out of us”

“Do I think this is real? No. Would I still go alone at night? Also no.”

Another legend stated that if you drove into the underpass and turned off the engine, you would be unable to restart the car and would hear hands touching your car– the hands of a woman that supposedly killed her baby in the area many years ago (no stories match this legend, so it was likely borrowed from nearby “Crybaby Bridge” in Westminster) 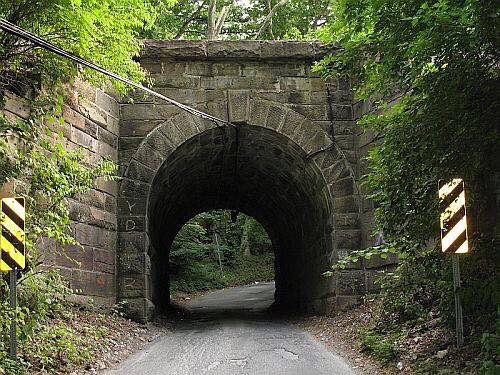 I’ve always known it as headless bridge. Never heard any story about where the name came from.