The Beltway Bistro food truck is preparing to make its debut, and it has been quite a ride. Last summer Burtonsville resident James Turner was about to launch his food truck, Beltway Bistro, when the truck was stolen and later recovered with all of the kitchen equipment gutted from the truck.

Licensing was challenging for Turner, but he was able to make it through and was about two weeks away from opening when the truck was stolen around Memorial day of 2021. It was recovered a few days later in Charles County, “gutted, wrecked, steering column messed up, painted, propane tank found inside – probably about to be burned.”

Covid made things very difficult with supply chain issues causing many delays. Turner had to prove his truck was stolen and go through the licensing process again. Insurance covered the damages to his truck, but he lost many months of being able to earn money so his friends started a GoFundMe to help him get by during that time. Turner told us he felt guilty, because he doesn’t like handouts, but was very grateful for everyone who donated.

Turner has over 30 years of restaurant experience. He recently spent 10 years at Blue 44 in DC, but he would sometimes work 14 hour days in the restaurant industry and wanted to spend more time with his teenage daughter, so he decided to go with his own food truck.

The opening of the food truck is the first phase of three that Turner is planning for. He eventually wants to start catering events and parties and then move to private dining options.

Turner’s Beltway Bistro is ready to ride as soon as he finds a space for it. He would love to set up shop in Burtonsville, and is currently looking for a location to set up his truck. He considers his truck an “upscale food truck” that would serve lunch and dinner from 1pm-6pm 2-3 nights per week. He would be willing to offer free lunch for employees of any business that would allow him to use their space for his truck. 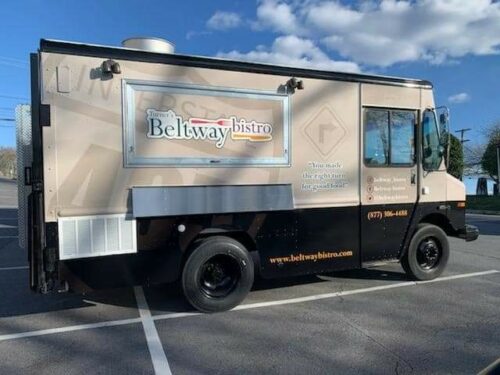