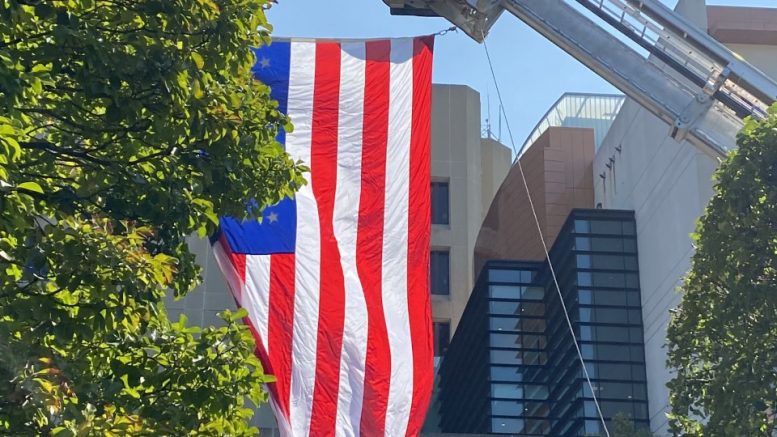 “Although it has been 20 years, the horror and heartbreak of September 11, 2001 remains heavy in our hearts,” said County Executive Marc Elrich. “We will forever remember our 11 County brothers and sisters who lost their lives in the attack on the Pentagon, those who went to work but never got the chance to come home, those who heroically fought against their attackers on Flight 93, and the courage of the first responders who rushed forward to the rescue, willing to put their lives on the line.”

“Today we take time to remember and honor the nearly 3,000 people who lost their lives on the morning of September 11, 2001,” Council President Tom Hucker said. “This is a difficult day for all of us, but it also is a reminder of the love and compassion our community shares for one another. We thank the first responders and courageous bystanders who put themselves in harm’s way and bravely fought to save as many lives as possible. As we mark this somber anniversary, we remember all of those lost, including eleven individuals who called Montgomery County home. We offer our comfort to the families who still mourn and come together to honor their legacies, which will be forever felt and implanted in the Montgomery County community.”

The County’s “Memorial to the Events of 9/11/01,” designed by Gene and Susan Flores consists of 11 benches, each dedicated to one of the lost residents. Each bench is stainless steel with wood seat slats and a slightly curved backrest engraved with lines from a poem, song, or thought, selected by family members. Inscribed in stainless steel on the end of each bench is the signature of the victim of the attacks.

At one corner of the park is a small, three-columned stainless-steel pavilion. Two round columns form an entrance and frame a square column into which is built a book that, when opened, reveals a bronze plaque listing the names of those lost and a statement from the County. A unique design in the roof includes a solar lens that captures the passing sunlight to illuminate each of the 11 names.

The eleven people who were killed in the attack are:

Biographical information is available at The National 9/11 Pentagon Memorial website.

“As we reach the 20th Anniversary of the assault on our Democracy – it is imperative that we honor those we lost by becoming worthy of their sacrifice,” said Rockville Mayor Bridget Donnell Newton. “Let us learn to communicate and collaborate, let us see each other as human beings and let us work together to ensure that America remains a safe and welcoming beacon of hope for all. We are stronger together.”

Montgomery County’s 9/11 Memorial Park is open to the public and is a place to reflect and pay respect. The park is located at the corner of East Jefferson and Maryland Ave. in Rockville.

The 20th anniversary inspires millions of people to rekindle the remarkable spirit of unity and compassion that arose in the immediate aftermath of the September 11 attacks, and to perform good deeds and other acts of service in tribute to those killed and injured, rescue and recovery personnel, and those who bravely rose in service in response to the attacks. To explore volunteer opportunities, visit Montgomery County’s Volunteer Center website.

Welcome Back Message from MCPS