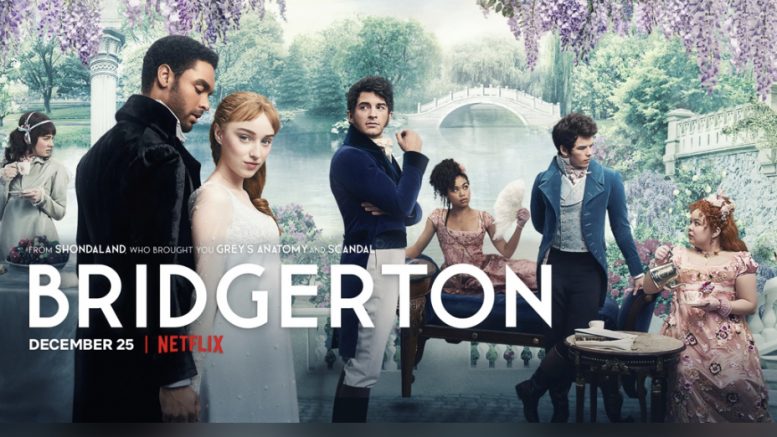 Taking place in the early part of the 19th century, the books follow the eight siblings in the Bridgerton family, four boys and four girls, as they seek the loves of their lives. For Van Dusen, bringing this world to life on the small screen is also about something else.

Though race isn’t discussed in the books, Van Dusen was adamant that he wanted the show to reflect the world in which we live. It’s also a central component for all of  Shondaland’s shows. Bridgerton posed a unique opportunity to have a multiracial cast with a period piece. Building the world of Bridgerton for the last three years has been Van Dusen’s only focus. Van Dusen wanted to take his love for period shows that he thinks are considered traditional and conservative and “turn it into something fresh, topical and relatable” (Valenti).

Van Dusen is known for working with Shondaland and writing and producing Grey’s Anatomy and Scandal.  He devoured Quinn’s stories after Rhimes gave him a copy of the eight-book series three years ago to see if it might be something he’d be interested in developing. While reading, he saw elements of his favorite types of storytelling: romance, sex, intrigue, all with a powerful family at the core.

Van Dusen stated in an interview with Pay Or Wait that he wants Bridgerton to be “pure escapism…that’s something I think we could all use right now.”  Behind all of the escapism, Chris Van Dusen aimed to have a modern commentary about how over the last 200 years, everything and nothing have changed, for men and women. The show was released on December 25, 2020 and has already soared to #1 in the United States.


Editor’s note: We are working on getting an interview with Van Dusen in hopes of hearing more about his time growing up in MoCo.