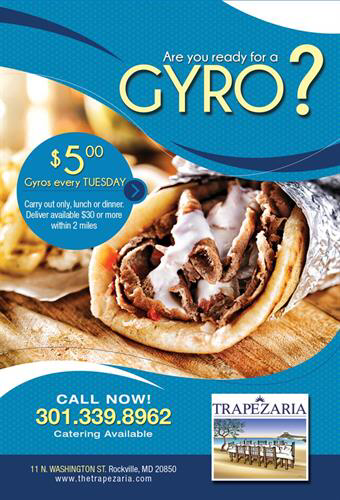 Silver Spring based Discovery Communications (owner of Discovery Channel, Animal Planet, Oprah Winfrey Network, TLC, etc.) has agreed to purchase Scripps Networks (HGTV, Food Network, Travel Channel, etc.) for $11.9 billion. How cool would it be to see some of those HGTV shows here in MoCo?

A bit late with this one, but the Gaithersburg and Germantown Buffalo Wings and Beer locations have closed. Cloverly location remains open (thanks to Jack Guzman for letting me know about the Germantown location).

Mamma Lucia in Falls Grove and Bethesda are both hiring servers and counter staff. Feel free to give either of the restaurants a call for more info.

For the second time in the last few months, I have heard a rumor that Ted’s Bulletin in Gaithersburg may convert to a Matchbox Pizza (Matchbox Food Group owns both brands).

Teavana stores in Montgomery and Wheaton Malls will be closing, as Starbucks has announced they’ll close all Teavana locations.
https://amp.cnn.com/money/2017/07/27/investing/teavana-stores-closing-starbucks/index.html

There have been talks about MCPS possibly restarting a ‘recovery school’ for students recovering from addiction. A similar type of program previously existed as a part of MCPS Alternative Programs until 2013.

A toxin was found in Lake Needwood and Lake Frank in Rock Creek Regional that can be harmful to humans and possibly kill dogs.
http://www.nbcwashington.com/news/local/Algae-in-Montgomery-County-Lakes-436563273.html?amp=y

The new H&M location at Pike & Rose will open at the end of this month.

Quarry House Tavern in Silver Spring is getting closer to re-opening according to the owner.
https://www.sourceofthespring.com/quarry-house-tavern-adega-update/amp/

Gaithersburg is joining Germantown and Silver Spring in trying to get into the medical marijuana dispensing business (businesses located there, not the places themselves).
http://www.bethesdamagazine.com/Bethesda-Beat/2017/Gaithersburg-Officials-Say-Pot-Shop-Could-Replace-Closed-Dry-Cleaners/

Washington Wizard All-Star, John Wall, spent a Friday night at Lucky Strike in Montgomery Mall two weeks ago. The Potomac resident chatted, took pictures with fans, and hung out for a few hours.

As you may have noticed, almost everyone in MoCo has headed out to Poolesville to take pictures in the sunflower fields (McKee-Beshers is probably the most popular spot). You have another few days of peak bloom season to go!

The old Sports Authority location in Gaithersburg will become a 99RanchMarket, one of the largest Chinese-American supermarket chains in the United States. They’ve told me they plan on opening early this Winter.

​
This edition of ‘News Around MoCo’ has been brought to you by Trapezaria Greek Kuzina in Rockville Town Square. $5 Gyros every Tuesday (carry-out only).