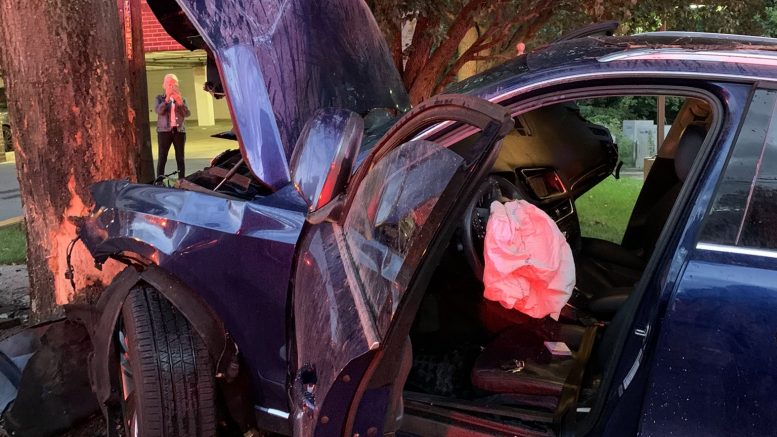 Gaithersburg, MD – While travelling to his part-time job on the evening of Thursday, September 23, Montgomery County Police Officer R.A. Felix-Fortuna came upon a single-vehicle collision on Montgomery Ave. and East West Highway, where he observed that the car had crashed into a tree.

Officer Felix-Fortuna pulled over to assist, along with two other vehicles, and was notified by another driver that a person was trapped in the car. The front end of the car was in flames and the cabin was filled with smoke.

A 13-year-old teenager who was also an occupant in the car was able to escape immediately after the collision.

Officer Felix-Fortuna cut the driver’s seatbelt and managed to get the 61-year-old female driver out of the vehicle, with the assistance of a good Samaritan.

Montgomery County Fire Rescue responded to the scene of the collision and provided immediate first aid to the victim and extinguished the flames. The female victim and the child were transported to area hospitals.

Officer Felix-Fortuna has been working as a patrol officer with Montgomery County Police since February of 2018 and assigned to the 3rdDistrict Station in Silver Spring.

He was previously an emergency medical technician and firefighter with the Bethesda-Chevy Chase Rescue Squad.

Preliminarily, it appears that the driver may have lost control of the car, crashing into the tree.  She is currently listed in stable condition at an area hospital.

Some MoCo Residents Receive Emergency Alert for Boil Water Advisory in DC, but MoCo is Not Affected

Update on HalfSmoke Coming to Rockville