Planet Fitness at 13031 Wisteria Dr in the Germantown Plaza shopping center has temporarily closed as renovations are currently being made to the location. Signage on the door reads: “We are working on an upgraded and expanded club! We temporarily close on 10/30 at 9pm and plan to re-open the gym floor tentatively on 11/12. Further communication will be sent out! -Planet Fitness Management”

Part of the renovations include expanding next door into the former site of Eye to Eye, which relocated to 19520 Waters Rd in Germantown over a year ago.  The nearby Gaithersburg Planet Fitness, which is also currently undergoing renovations, is open for business. The company will also be opening a new location at 5520 Randolph Rd in Rockville (Montrose Shopping Center) in the space that was formerly occupied by Gold’s Gym.

Last week we reported that Lotte Market, also in Germantown Plaza, has announced it will be closing by the end of the year.  Montgomery County locations in Gaithersburg, Rockville, and Silver Spring will remain open. Lotte Plaza Market is a grocery store that specializes in Asian groceries. Per its website, Lotte started with a single store on Veirs Mill Road in1989 and now has a dozen locations throughout Maryland, Virginia, New Jersey, and Florida. “Our goal is to open 50 Lotte Plaza Market locations by 2030.” The Germantown location has been active for 15 years, since 2007. There is no current word on a replacement for the grocery store. We’ll provide an update when the closing date is solidified. 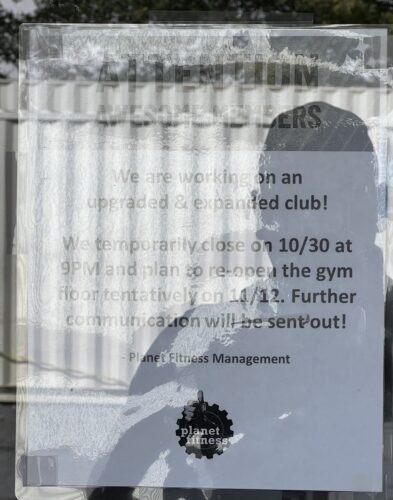