Per MCPD:
For Immediate Release: Friday, July 22, 2022
Detectives from the Montgomery County Department of Police, Major Crimes Division – Robbery Section, are asking for the public’s help in identifying a suspect they believe is responsible for at least three bank robberies in Montgomery County.

On Tuesday, January 18, 2022, Montgomery County Police 3rd District officers responded to the Sandy Spring Bank, located on the 3500 block of Spencerville Rd. in Burtonsville, for a bank robbery that just occurred. The preliminary investigation revealed that at approximately 3:10 p.m., the male suspect entered the bank and approached a teller window. Once at the window, the suspect slid a note to the teller, announcing the robbery and demanding money. The teller complied and gave the suspect an undisclosed amount of money.

The suspect left the bank in an unknown direction.

On Friday, February 18, 3rd District officers responded to the M&T Bank on the 12200 block of Tech Rd. for a bank robbery. Investigators determined that the suspect entered the bank, approached the teller, and passed a note announcing the robbery and demanding money. The teller complied and the suspect left with an undisclosed amount of money.

On Saturday, March 12, at approximately 10:05 a.m., 4th District officers responded to a bank robbery at the Capitol One Bank, located on the block of New Hampshire Ave.

As with the previous robberies, the suspect entered the bank, approached the teller window, passed a note announcing the robbery, and demanded cash.

The suspect is described as a Black male between 5-feet, 8-inches to 5-feet, 10-inches tall, medium build and around 40-years-old. The suspect usually wore one black glove and one blue latex glove when committing the robberies and, in each robbery, passed a handwritten note stating that he had a gun and bomb.

Anyone with information regarding this suspect or these crimes is asked to call the Major Crimes Division at 240-773-5070 or 240-773-TIPS or contact Crime Solvers of Montgomery County toll-free at 1-866-411-TIPS (8477). A reward of up to $10,000 is being offered for information that leads to the arrest of the suspects. Callers can remain anonymous. 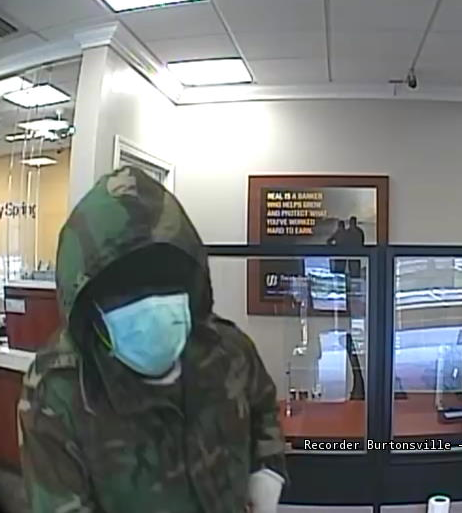 Updated Opening Information for Pollo Campero on 355 in Gaithersburg