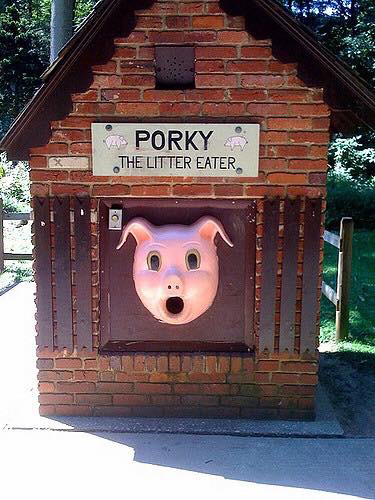 Photo courtesy of B-CC Back in the Day Facebook Page

If you’ve been to Cabin John Regional Park in the last half century or so you’ve probably seen a bizarre, miniature house-like structure that has a pig face with its mouth wide open on one side. That’s Porky. You can feed him paper and cardboard and soft drink cans, but you can’t feed him bottles or broken glass…glass gives him a tummy ache.

Porky has been there since 1966, making his debut one year after Billy the Litter Eater over at Wheaton Regional Park.

“I still have nightmares of my arm getting sucked into this thing” commented Richard Schaffer as he shared a picture of the famous trash dispenser. Creepy Basement, a popular website that is comprised of creepy highlights from across the world, refers to Porky as an “eternally hungry demon pig that commands children to feed him with his creepy 1950s radio voice.”

While we can Porky coming off a little scary initially, we also remember rushing to him anytime we had to throw something away at the park. “I loved Porky and  I don’t think any of us were ever scared of him” commented Amanda Lyons on a previous picture of Porky.

That means he did his job— encouraging kids

to throw their trash away rather than litter. All in all, his iconic presence  reminds us of some of the fun times we had during our childhood.

Next time you stop by Cabin John Park, make sure you feed Porky. He’s still there and he’s still hungry.

Is The Froyo Bubble Bursting?