The National Weather Service has increased confidence in potential winter weather headed our way this Thursday, according to the Day 4 Winter Storm Threat map they’ve released (valid Thursday 7am through Friday 7am). 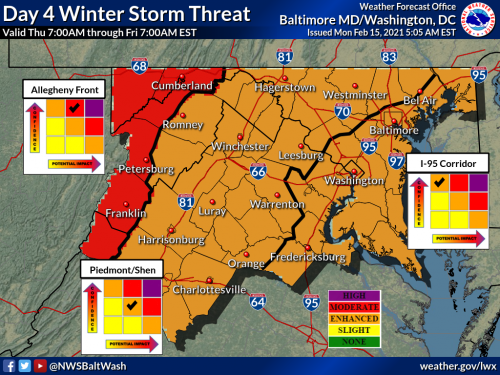 This storm looked to be all rain and has now started trending towards bringing us some winter weather on most models. 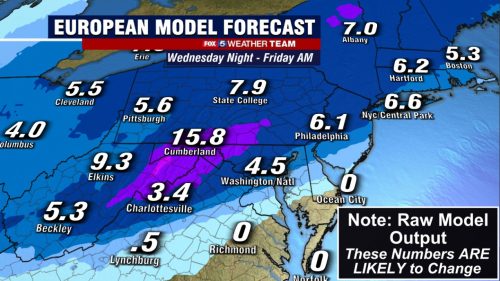 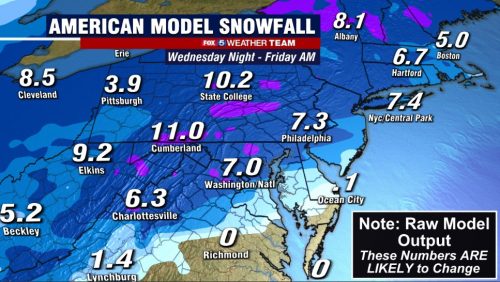 As you can see, both show a decent amount of snow headed our way, but as the warning on both maps states… “these numbers are likely to change.”

You’re watching your favorite college football team play one of the best teams in the country (the winter storm). Your favorite team isn’t really that good (DC area winter weather).

Every now and then they pull off a big win (good amount of snow), but usually they lose (barely any snow).

Sometimes they score early and they’re up, so you get excited, but often times they lose that lead pretty quickly (we end up getting mostly rain).

Other times they’re even up late in the game, but deep down inside…you still know how the game is probably going to end (6-8” becomes 1-2” last minute).

Every now and then…they end up winning. Usually it’s close and they barely win (moderate snowfall), but sometimes it’s a blowout (blizzard).

Bottom line is this: It’s okay to be excited as long as you know what’s likely to happen at the end.

We’ll keep an eye on this one and have updates for you as things change or get closer to the event.