The National Weather Service updated its maps overnight, increasing potential snow totals for most of the area.

Per the maps, all of MoCo is in the 1-2” range for snowfall tomorrow morning. The “reasonable worst case scenario” map is now at just about 2 inches so confidence is increasing for 1-2” all around. 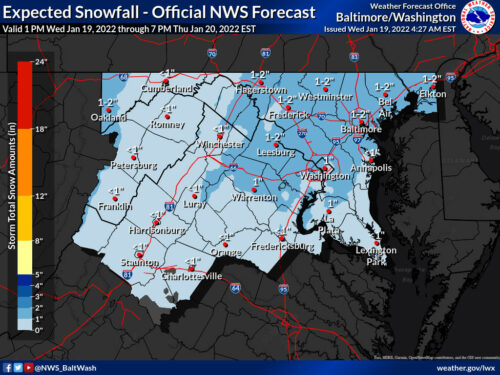 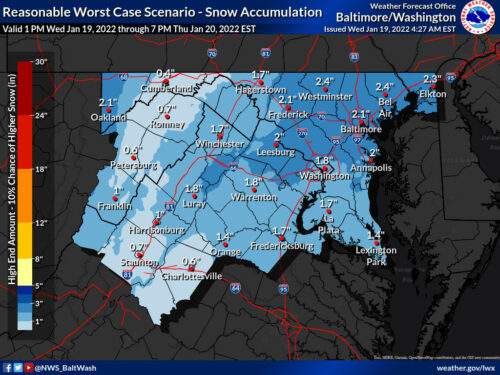 Chuck Bell of NBC4 also tweeted that his confidence in at least an inch has increased to 80% with a 30% chance of getting over 2 inches and just a 5% chance at over 3 inches.

Just updated. My confidence in most of the DC Metro area getting an inch of snow between 5-9am Thursday has increased. I also moved up the chances for 2" of snow from 20% to 30%, and lowered the chances of anyone getting more than 3". A slow, slushy slog of an AM commute for sure pic.twitter.com/idthSk3ant

The rain has dried out a bit in some models, so we’re going to wait for the short range models later today to see if we’ll be getting rain then a switch over to snow or just snow in the morning.

Highs today will be in the mid 40s and it could be the last time in a week or two that we reach 40° as cold is expected for a while after this.

If the rain does come through, we expect it to start around 2am or so and the changeover to snow to occur between 5am and 7am. Initially this will only make roads wet, but enough snow could lead to snow sticking and the timing during the morning rush does not help with anyone’s commute. Snow should be out of the area by late morning.

We’ll have additional updates throughout the day.