Rockville Man Pleads Guilty to Murder of His Mother

Today in the Circuit Court for Montgomery County, MD, before the honorable Judge Harry Storm, defendant Kevin McGuigan, 24, of Rockville, MD, pleaded guilty to first-degree murder for the death of his mother, Jaclyn McGuigan.

He faces a maximum of life in prison and will be sentenced at a hearing scheduled for January 3rd at 8:30 a.m.

McGuigan was found competent to stand trial by Judge Storm this fall. The murder occurred in December of 2018 outside of St. Raphael Catholic Church located at 1513 Dunster Road in Potomac.

The original police report from December 2018 can be seen below:

Detectives from the Montgomery County Police Department – Major Crimes Division have arrested Kevin Justin McGuigan, age 21, of the 10300 block of Grosvenor Place in Rockville, with the first-degree murder of his mother, 49-year-old Jaclyn McGuigan, of Marwood Court in Rockville.

On Friday, December 28, at approximately 6:00 p.m., 1st District officers and Rockville City Police Officers responded to the report of an assault that had just occurred in front of the Saint Raphael Catholic Church and School located at 1513 Dunster Road.  Responding officers located the victim outside of an entrance to the church with wounds that appeared to be from a cutting type of instrument.  Witnesses, officers, and Fire & Rescue personnel attempted life-saving measures.  The victim succumbed to her injuries at the scene.

Detectives spoke with witnesses at the scene who heard loud screaming and observed the victim laying on the ground in front of the church and the suspect standing over her.  The suspect fled in a Honda sedan.

At approximately 6:49 p.m., officers located the Honda sedan abandoned at Falls Road Local Park.  The vehicle was registered to Jaclyn McGuigan. Officers observed property in the vehicle that was determined to belong to Kevin McGuigan.

During the investigation, it was determined that Jaclyn McGuigan was last seen leaving her Marwood Court residence in her Honda sedan with her son Kevin McGuigan at approximately 5:30 p.m. on December 28.

On Saturday, December 29 at approximately 7:00 a.m., Kevin McGuigan was arrested by Montgomery County police officers at a gas station in Rockville on the strength of a Montgomery County arrest warrant charging him with first-degree murder.  He was transported to the Central Processing Unit. 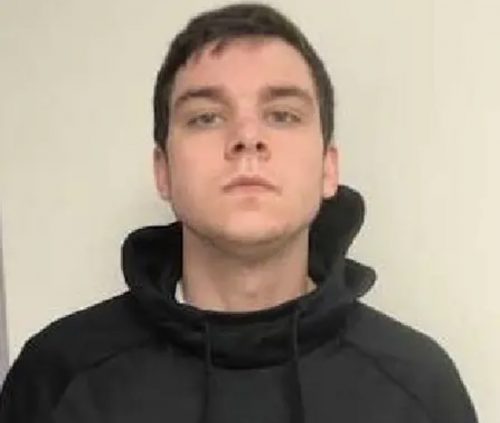