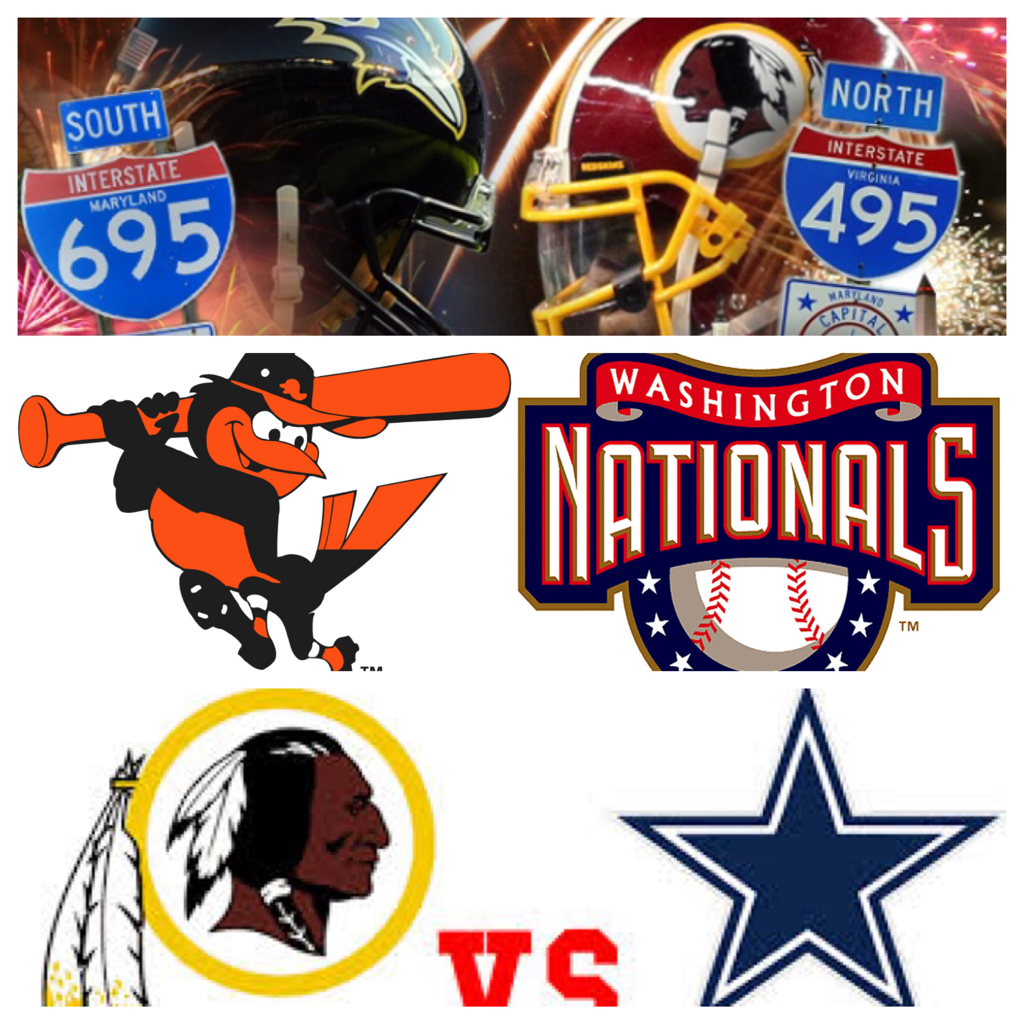 Let me start this by saying that this is just a fun post. You’re entitled to like any team that you want and we don’t have to share the same views.

Today is a pretty big day for football fans in our area. The local football team, the Washington Redskins, are playing their biggest rivals, the Dallas Cowboys. With so many Cowboys fans in the area, it prompted me to write about locally grown fans of other teams.

Here are my personal thoughts/rules:

– MoCo is a D.C. suburb, so D.C. sports teams are considered the home team.

– I’m an Orioles fan because the Nats didn’t exist when I was growing up and, to me, switching favorite teams is a big no-no (I’ll mention the exception to the rule later).

– I don’t mind the Nats and I would be happy if they were to ever win it all, unless it was against the O’s. That doesn’t mean I have two favorite teams, because that’s also against my rules.

– Though I am an Orioles fan and I’m ok with the Nats, I’m a Redskins fan and I despise the Ravens. I didn’t mind them in their first few years of existence. I remember buying Eric Zeier and Rod Woodson jerseys on sale for $9.99 a piece from Sports Authority priced so low because of how bad the Ravens were. What soured me on the Ravens was the way people embraced them as a home team AFTER their Super Bowl win. Bandwagon = Not for me.

– Here’s the exception to my switching teams rule:
I was a fan of the Georgetown Hoyas (NCAABB) and Miami Hurricane (NCAAFB) growing up. Primarily because they were both pretty good teams and it was cool to like them (I also consider Georgetown a local team). I switched over to Maryland for both sports because I attended the University of Maryland.

– I consider liking the home team’s biggest rival the equivalent to something like being a student at Quince Orchard High School and walking around school with a Northwest t-shirt on (currently the biggest rivalry in MoCo sports). To me it seems attention seeking and the reasons behind it are usually bandwagon based, though most think up some pretty clever reasons as to why they like those teams from random cities.

– You have to stick with your team through thick and thin. In my eyes there’s nothing that should make you abandon your team, including; disliking ownership, poor front office, lack of success, etc.

– I get that sometimes we have roots that go beyond where we were born and raised, but is EVERYONE really from Pittsburgh or Boston?! I say that in jest, but if the Penguins, Steelers, Patriots, etc. weren’t as good as they’ve been, would they be a little quicker to drop grandpa’s favorite team?

Ultimately, you can like any team for any reason. I just look at it as the team representing the area and I’m proud of the area I’m from.

What are your thoughts/rules when it comes to being a fan of the home team?

The Halal Guys Are Coming to MoCo (Two Locations)

Councilmembers Propose Funding for Sports Programs That Are...